The Navy has named the seven USS Fitzgerald sailors who died after the destroyer collided with a cargo ship Saturday... 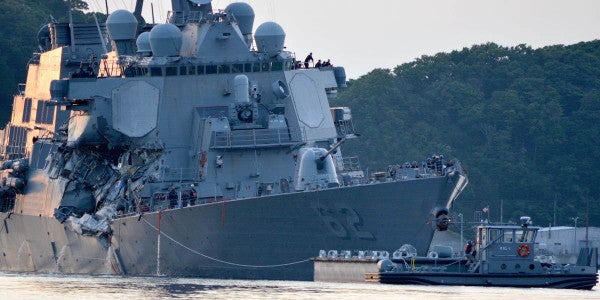 The Navy has named the seven USS Fitzgerald sailors who died after the destroyer collided with a cargo ship Saturday off the coast of Japan.

A 7th Fleet statement issued Monday morning identified them as:

The collision between the Fitzgerald and the Philippine-flagged ACX Crystal happened about 2:30 a.m. Saturday, about 64 miles southwest of Yokosuka near the Izu Peninsula, a Navy statement said.

Seven sailors were missing, and three sailors, including the ship’s commander, were medically evacuated to Naval Hospital Yokosuka.

Cmdr. Bryce Benson and one of the injured sailors have been released, the 7th Fleet announced Monday morning on its Facebook page. The other sailor remains hospitalized.

Navy officials announced Sunday that search-and-rescue efforts had been suspended and that a number of remains had been recovered, but declined to provide further details pending next-of-kin notification.

The sailors were found in flooded berthing compartments after search-and-rescue crew members gained access to spaces that were damaged during the collision, the 7th Fleet said in a statement Sunday.

The pair also plan to visit other sailors and civilian workers from the base’s repair and maintenance facilities to thank them for assisting with the Fitzgerald, the statement said.

The ACX Crystal was heading east, not far from its Tokyo Bay destination, when it turned around and traveled in a circle, according to public data from the ship’s automatic tracking system posted on Marinetraffic.com. It had completed its circle at roughly the same time of the reported collision, according to the data.

The Japan Coast Guard has interviewed the Crystal’s crew about the incident, but has yet to speak with Fitzgerald personnel, a spokesman said.

There were no injuries or missing personnel reported on the ACX Crystal, he said.

Vice Adm. Joseph Aucoin, 7th Fleet commander, told reporters at Yokosuka on Sunday that several investigations into the incident will be conducted, and that he will appoint a flag officer to oversee a Judge Advocate General Manual Investigation.

Aucoin, speaking near the damaged vessel, added that the Navy intends to fully cooperate with Japanese authorities on their investigation.

About 400 ships pass each day through the shipping lane where the collision occurred, said the coast guard spokesman, who added that three similar accidents happened there within the past five years.

Aucoin said the commander’s living area was among many spots on the ship that received significant damage.

“His cabin was destroyed,” Aucoin said. “He’s lucky to be alive.”

“The ship is salvageable,” he said. “It will require some significant repairs. You will see the USS Fitzgerald back as one of our warships here. [Repair time] will take months, hopefully under a year.”