The sailor who died aboard the guided-missile cruiser USS Vella Gulf while it was in the Mediterranean Sea was Petty Officer 2nd Class Imran Khan, the Navy said 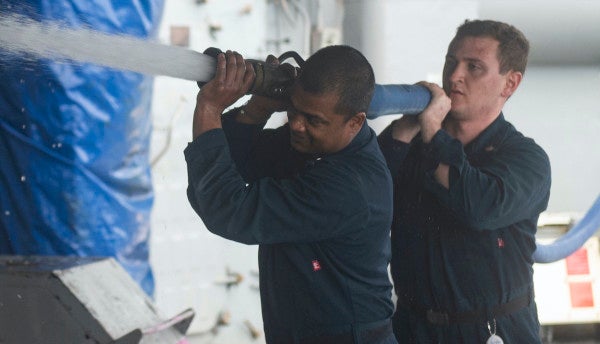 The sailor who died this week aboard the guided-missile cruiser USS Vella Gulf while it was in the Mediterranean Sea was Petty Officer 2nd Class Imran Khan, the Navy said Friday.

Khan was a boatswain’s mate aboard the ship. He was medically evacuated by helicopter to Greece, where he was pronounced dead Tuesday at a local hospital upon arrival. Navy Times first reported the death, saying the sailor died Tuesday evening after he fell down a ladderwell and fractured his skull on board the guided-missile cruiser.

The Navy said the cause of Khan’s death is under investigation.

“The entire Vella Gulf team is saddened and grieving the tragic passing of our shipmate and friend, BM2 Imran Khan,” said Capt. Andrew Fitzpatrick, the Vella’s commanding officer, in a statement. “A beloved and steadfast member of our team, his passing has been felt deeply throughout the command. Our hearts are with the entire Khan Family as we extend our deepest sympathy for their loss.”

Kahn enlisted in the Navy in May 2007 and had been assigned to Vella Gulf since November. The Vella Gulf is part of the Eisenhower Carrier Strike Group.