The Navy is investigating allegations that sailors in Okinawa attempted to unlawfully convert Japanese citizens to Christianity through a public... 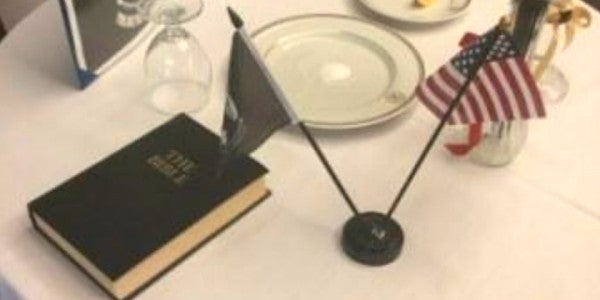 The Navy is investigating allegations that sailors in Okinawa attempted to unlawfully convert Japanese citizens to Christianity through a public display inside a military hospital.

Pearigen is responding to a seven-page complaint filed with his command Thursday by the nonprofit Military Religious Freedom Foundation on behalf of 26 service members or Department of Defense civilian employees and their families in Okinawa.

They allege that military leaders on March 26 placed a Christian Bible on a Prisoner of War/ Missing in Action display inside the hospital’s public gallery.

A placard on the “Missing Man” display told visitors in English and Japanese that the religious book “represents the strength gained through faith to sustain those lost from our country, founded one nation under God.”

“The statement on the exhibit’s placard is nothing more than an illegal, unconstitutional proselytization from an extremist, fundamentalist Christian sect. It ignores all followers of other religions and totally ignores all those who subscribe to no religion — all in blatant violation of (Department of Defense) and (Department of the Navy) regulations,” wrote Donald G. Rehkopf Jr., the Rochester, N.Y., attorney representing the New Mexico-based foundation, in the formal complaint.

The U.S. Constitution bars religious tests for public offices such as those in the military, and Pentagon regulations forbid a command from endorsing any faith over others.

In a Friday message emailed to Rehkopf, Navy Medicine West paralegal David Ostrander indicated that “we are investigating the matter now” and would have “more information to follow.”

Messages left with Cdr. Edward O’Brien, Pearigen’s staff judge advocate, were not returned and the admiral’s spokesman, Mike Alvarez, said that he’s trying to determine the status of the probe now.

“We reached out initially to the hospital at the beginning of the week but they didn’t take care of this,” said Michael “Mikey” Weinstein, a former Air Force officer and the foundation’s founder, during a telephone interview on Friday. “This should’ve been simple. We’ve engaged many times on this issue everywhere, and it’s taken care of quickly. Here, they translated a phrase into Japanese in order to proselytize the Japanese. This might’ve violated our treaty with Japan.”

Weinstein said that 16 of the 26 petitioners identify as Christians — including Roman Catholics and several Protestants — with the rest a mix of Jews, Native American, Shintoists, Buddhists, atheists, and agnostics.

According to the written complaint, Weinstein was told by a Navy officer in Okinawa that the hospital could not resolve the issue for at least another month because the commander was temporarily away on other duties.

He called on the Navy to remove the Bible from the display, discard the language about “one nation under God” and launch an independent investigation into the matter and assign appropriate disciplinary measures to those responsible.

Weinstein said that since Easter his organization had taken on 117 new clients, including the troops in Okinawa, who are disgruntled about a wide range of alleged religious violations by military units.

Earlier in the year, 27 active-duty, retired and veteran Marines had called on depot commander Brig. Gen. William Jurney for a new policy allowing troops of other faiths to erect similar religious displays where the nativity scene was.

Twenty of the petitioners were Jews who wanted a Hanukkah menorah on the grounds each December, with the rest Christians or others who worshipped no deity but wanted to take a stand on religious fairness, according to the foundation.