US Navy touts rescue of Iranian mariners in ‘grave distress’

"Rendering assistance to save lives if possible is not only international law and custom of the sea, but it is also the right thing to do." 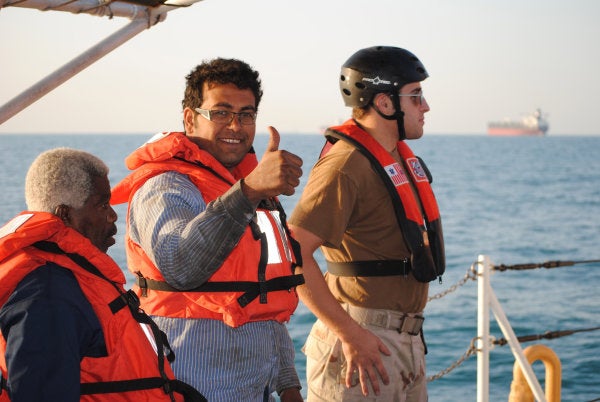 Even as tensions continue to run high between the U.S. and Iran, Navy officials say a recent rescue effort in the Middle East serves as an example of good behavior on the high seas.

“The rescue,” the statement reads, “is an example of professional mariners rendering assistance to others in distress at sea, a responsibility and mission that we in the U.S. Navy share and take very seriously.”

The men were spotted floating in a large plastic water tank just before 6:30 p.m. local time about 80 miles off the coast of Oman, Christopher Murray, the ship's master, said in a statement provided to Military.com.

The men were in “grave distress,” said Ed Hanley, vice president of labor and marine standards for Maersk Line, Limited.

The crew's only concern was helping them, he added.

“Rendering assistance to save lives if possible is not only international law and custom of the sea, but it is also the right thing to do,” Hanley said. “Sadly, the Iranians said that in the course of being adrift over 19 days, several other ships had stopped, provided them with food and water, but refused to take them aboard. Whether this was to avoid the cost of delays associated with rescue efforts or for other reasons we can never know.”

The Maersk Kinloss performed a Williamson man-overboard rescue turn to reach the men in the water tank but overshot the distance on the first pass because it was tough to judge in the dark, Murray said.

The crew could hear the men yelling, while waving an Iranian flag and a flashlight. Murray said their flashlight was critical in helping the crew again locate the men.

The crew was able to get about 15 feet from the tank, and two of the men climbed out and onto the ship. The plastic tank then capsized, and the third man fell into the water. The crew was able to lower a ladder to him as he clung to a lifebuoy, Murray said.

Once onboard, the men were moved to a room where they were given water, food and clothing. Within hours, Murray said, the ship arrived in Salalah, Oman, where the Omani coast guard and royal police took custody of the men.

Murray said the Maersk Kinloss had practiced the Williamson man-overboard turn a day earlier as part of a monthly routine. Because of that, he said, the incident was “rather run of the mill.”

The Maersk Kinloss is enrolled in the Maritime Security Program, Hanley said. The program is made up of privately owned ships operating in international commerce that are also available to assist the military during war or national emergencies.

The ship is crewed by American citizens. Maersk Kinloss, which was built in 2008, can carry 85,000 tons and is powered by a 75,000-horsepower main engine enabling a speed of 24 knots, Hanley said.

That makes it one of the largest ships in the U.S. registry, he added.