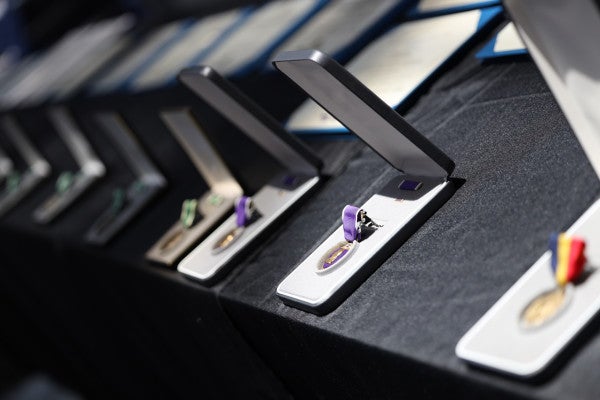 The Navy has recognized 16 people whose heroic actions saved lives during a December terrorist attack on a Florida military base — including several who were themselves wounded in the shooting.

Federal agents later determined that the attack was inspired by international terrorism — “an enemy of the United States of American on American soil,” Balsinger said.

“Your bravery in the face of clear danger, your courage as gunfire rang out, display the finest qualities in our naval service,” he told the personnel receiving medals.

The attack has led to a host of new rules for foreign military students training at U.S. installations, including a ban on personal weapons and base-access restrictions. But a new report from The New York Times details a series of lapses that allowed the attacker to end up in Pensacola.

Defense and intelligence officials told the Times that the Saudi officer represents a “new kind of terrorist” — a contractor of sorts with tactical flexibility that could be much harder to detect.

As the investigation into the terror attack continues, Navy officials said the 12 people recognized Friday took selfless action to save their comrades. From crucial emergency calls to lifesaving aid while the shooting was still happening, the awards detailed how unarmed troops and civilians at Naval Air Station Pensacola sprang into action when their base came under attack.

“May we all be inspired by their examples and may we always answer the call of a shipmate in danger as they did,” Chief of Naval Personnel Vice. Adm. John Nowell said in a video message shown during the ceremony.

Two Marines assigned to Pensacola received the Navy Department's highest non-combat heroism award Friday for their actions during the attack.

Gunnery Sgt. Ryan Masel and Staff Sgt. Samuel Mullins were in a nearby building when the shooting broke out. Balsinger detailed how they rushed into Building 633, toward the sound of gunfire despite not having weapons. The pair received the Navy and Marine Corps Medal.

“Armed with nothing more than a fire extinguisher and a fighting spirit, they pursued the shooter and were ultimately instrumental in providing care and cover for the wounded,” Balsinger said.

Their actions were previously highlighted by U.S. Attorney General William Barr, along with those of former Navy Airman Apprentice Ryan Blackwell, who received the same award as Masel and Mullins, along with a Purple Heart.

Blackwell tied his own belt around his arm after being shot and helped usher his colleagues to safety. He and former Marine Capt. Kyle Whitlock, who received the Navy and Marine Corps Commendation Medal for his actions during the attack, were recognized at a separate ceremony.

During the attack, civilian emergency responders weren't cleared to get onto the base until “the threat was neutralized,” Balsinger said. The instructors and students nearby, he said, were “the only hope for the wounded's survival.”

“They were ready,” he added.

A service member and a civilian were both credited with making emergency calls that led authorities to the gunman — including Ensign Breanna Thomas, who was injured in the attack and called 911 from behind a desk during what Balsinger described as “a volley of gunfire” as she and two sailors were taking cover.

During a pause in the attack, the three removed an air conditioner from an office window, giving them enough room to escape the building.

“Ensign Thomas was the last to leave the danger area, ensuring two critically injured airmen got to safety first,” Balsinger said. She received the Purple Heart and Navy and Marine Corps Commendation Medal.

Another ensign, Kristy Lehmer, received the Purple Heart on Friday. Despite being shot in the attack, Lehmer got herself to medical assistance before collapsing.

Ronnie Moreno and Kevin Groff received the Department of the Navy Superior Civilian Medal for Valor for doing the same. They gathered medical bags, a defibrillator and other supplies, before braving gunfire to get the materials to the scene.

Raven Smith received the Department of the Navy Civilian Service Commendation Medal. She had just arrived at work when the first shooting victims began running out of Building 633. She made the first call alerting emergency responders that the building was under attack.

The Navy will also present Airman Apprentice George Johnson, who's now with a new command, with the Navy and Marine Corps Commendation Medal and Purple Heart, according to a news release. Jessica Pickett will, in a separate ceremony, receive the Secretary of Defense Medal of Freedom Award for her actions that day.

During the ceremony, Balsinger noted another recent loss for the command after Capt. Vincent Segars, the head of Naval Aviation Schools Command, and Cmdr. Joshua Fuller died in a civilian plane crash earlier this month.

Segars, Balsinger said, was a brilliant leader who led the command and their families through an extremely dark time following the attack. And Fuller had helped coordinate the ceremony honoring the three people killed in the attack, including the Blue Angels' missing man formation flyover.

“To not have these two men here with us at this ceremony hurts,” Balsinger said. “But we will honor their legacies and their careers that both began and ended at Aviation Schools Command.”