A review of the Navy and Marine Corps' legal community — ordered after the court-martial of then-Navy SEAL Edward Gallagher — found ethical and systemic problems in the JAG communities and recommends organizational changes and increased training, senior officers said Friday 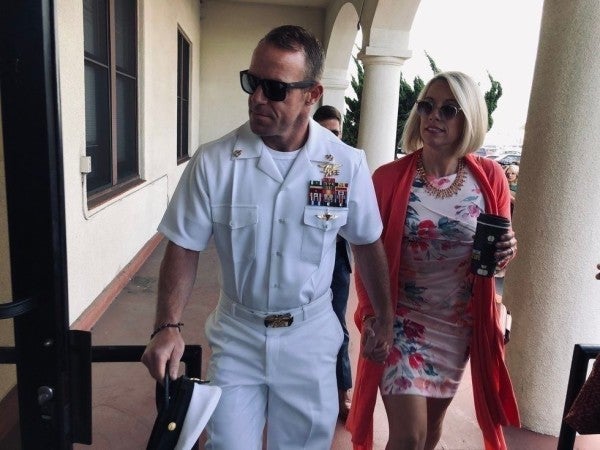 A review of the Navy and Marine Corps' legal community — ordered after the court-martial of then-Navy SEAL Edward Gallagher — found ethical and systemic problems in the JAG communities and recommends organizational changes and increased training, senior officers said Friday.

The review of the Judge Advocate General Corps was ordered Aug. 1 by then-Chief of Naval Operations John Richardson after President Donald Trump lashed out at the Navy on Twitter about awards that were to be given to the prosecutors in the Gallagher case.

The review, done by an executive review panel, found systemic problems relating to other military law cases in addition to Gallagher's.

For instance, it cited ethical problems relating to the Glenn Defense Marine Asia case, in which contractor Leonard Glenn “Fat Leonard” Francis bribed dozens of Naval officers with lavish meals, often with the approval of staff JAGs — the Navy's lawyers — from the early 1990s through the time of his arrest in 2013 for bribery and fraud.

Although the review mentions Gallagher once in its 273 pages, the timing of it leaves little doubt that Gallagher's case, and Trump's anger at the Navy over it, was a factor in the report.

Gallagher was accused but acquitted of several war crimes last July, including charges he shot civilians and killed a wounded ISIS fighter in the neck, killing him, in 2017. In the end, he was convicted of posing for a photo with the fighter's corpse, a crime for which the jury reduced him in rank.

Gallagher's case was marred by prosecutor misconduct. The Navy trial judge ruled an email-tracking scheme cooked up by the Naval Criminal Investigative Service and implemented by the lead prosecutor violated the SEAL's constitutional rights.

That prosecutor was removed from the case weeks before trial and replaced.

The case was a lightning rod in conservative media, with the Navy JAG Corps baring the brunt of criticism from pundits and Trump.

Trump intervened in the case several times — he overturned a Navy judge's decision and had Gallagher released from confinement, he signaled his intent to pardon the SEAL before trial began, and one of the president's personal attorneys joined Gallagher's defense team.

After Gallagher's acquittal on most charges, Trump congratulated the SEAL via Twitter and intervened weeks later when Navy prosecutors were given achievement medals for their work on their case. Trump revoked those medals, again, via Twitter.

The same day Richardson ordered the review of the JAG Corps, he also assumed authority over Gallagher's war crimes case and the case against Navy SEAL Lt. Jacob Portier, Gallagher's platoon commander, who faced charges that he facilitated a cover-up.

Richardson dismissed the charges against Portier and ordered the JAG review.

A Navy spokesman told the Union-Tribune in August that evidence in those cases had degraded and that convictions were unlikely.

Trump was not finished protecting Gallagher.

After the Navy upheld the SEAL's conviction of posing with a corpse and reduced him in rank, Trump stepped in and restored it.

When the commander of Naval Special Warfare Command, Rear Adm. Collin Green, moved to strip Gallagher of his coveted SEAL trident and status in the elite community, Trump again stepped in and protected the SEAL.

The Navy's review did not address what a senior Navy official described as a crippling morale hit suffered by the Navy JAG Corps — and the Navy at large — after the President's actions.

“Both the president's and Richardson's interventions impacted morale and people's belief in themselves,” said the senior officer, who was not authorized to comment. “There is no certainty that leadership would have their backs. There was significant concern in the Navy, from (lieutenants to admirals), about Trump's involvement and whether it would affect careers and how it would impact the military justice system.”

Adm. Robert Burke, vice chief of naval operations, declined to answer questions about the JAG morale issue when asked by the Union-Tribune during a Q&A session with reporters Friday.

He said that the Navy JAGs are “talented individuals.”

“We have talented judge advocates in the Navy who provide excellent service,” Burke said. “There are things we can work on to get better … but the individuals are absolutely talented individuals.”