In the early 1980s, the Reagan Administration was looking to fund high visibility defense programs. President Ronald Reagan had been elected... 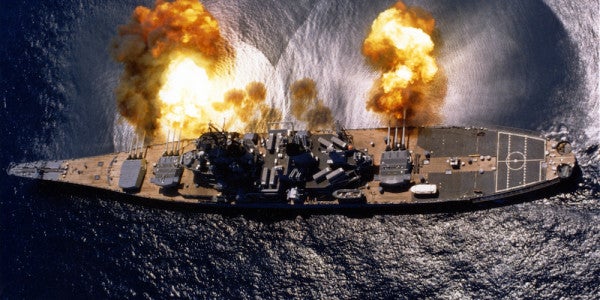 In the early 1980s, the Reagan Administration was looking to fund high visibility defense programs. President Ronald Reagan had been elected on a platform of rebuilding the armed services after the “hollowing out” of the early 1970s.

One example was the reactivation of four World War II-era Iowa-class battleships, which started in 1982. Each of the four ships, Iowa, Missouri, New Jersey and Wisconsin was refurbished, their sixteen and five-inch guns brought back online. Each battleship was also equipped with 16 Harpoon anti-ship missiles, 32 Tomahawk land attack cruise missiles and four Phalanx close-in weapon systems (CIWS) for defense.

The four battlewagons were swiftly retired after the end of the Cold War because the manpower-intensive vessels each required a crew of nearly two thousand. That made them early victims of the post-Cold War drawdown as the defense budget was sharply reduced. Today, all four serve as memorials or floating museums. Retirement put an end to future upgrades, which might have included the boldest of them all.

In the November 1980 issue of the United States Naval Institute Proceedings, Captain Charles Myers, USN (retired) proposed reactivating the battleships with significant modifications to the aft section. The proposal envisioned deleting the number three turret near the stern and the three sixteen-inch guns housed in it.

In place of the number three turret would be an extraordinary set of armaments. A V-shaped ramped flight deck would be installed, with the base of the V on the ship’s stern. Each leg of the V would extend forward so that planes taking off would fly past the stacks and ship’s bridge. Two elevators would bring Boeing AV-8B Harrier II jump-jets up from a new hangar to the flight deck. It was envisioned such a conversion could support up to twelve Harriers.

That’s not all. Existing five-inch gun turrets would be deleted and replaced with 155-millimeter howitzers for naval gunfire support. In the empty space between the V would be a field of tactical missile silos such as the Mk.41. Up to 320 silos could fit in this space, supporting a mixture of Tomahawk land attack missiles, ASROC anti-submarine rockets, and Standard surface-to-air missiles. This massive loadout would dwarf even the 154 Tomahawks found on today’s Ohio-class guided missile submarines.

Myers called the vessel the “Interdiction Assault Ship”. The ship could interdict enemy fleets on the high seas, particularly the Soviet Navy’s Kirov-class nuclear-powered battlecruisers that were then under construction at the Leningrad shipyards. In a wartime scenario, the U.S. Navy worried Kirov battlecruisers and their formidable missile armament could be used to target American aircraft carriers or devastate convoys of reinforcements headed to Europe.

Line drawings of the proposed aircraft carrier conversion for hulls BB-65 and BB-66. Plans to move forward with this conversion were ultimately dropped, and both hulls were eventually scrapped.Photo via U.S. Naval Historical Center/Wikimedia Commons

The Interdiction Assault Ship (IAS) would go after the Kirovs, bombarding them with 16-inch guns and Harpoon missiles. Embarked Harrier jump jets could also join in the fight. The ships would be an economy of force measure, allowing aircraft carriers to go about their preassigned wartime duties with minimal distraction.

The IAS also had a second mission: supporting Marines in an air assault landing. The six remaining 16-inch guns, backed up by the new 155-millimeter guns, could bombard land targets prior to an assault. The Navy and Marines would use the flight deck, in conjunction with Iwo Jima-class helicopter landing ships and Tarawa-class amphibious assault ships, to help manage the assault force of an airmobile assault on an enemy-held position.

Under such a concept, the IAS would become part of an air assault staging area. The flight deck could be used as excess space to hold helicopters. The hangar was estimated to be able to accommodate up to 500 Marines. Once ready, the armada of helicopters would take off, escorted by the Interdiction Assault Ship’s Harrier fighters, which would also provide close air support until Marine artillery could be landed.

Although much discussed, execution of the IAS concept was delayed at least twice. The Department of Defense and the Navy wanted the battleships reactivated as quickly as possible, and as a result, they were updated for service with only a minimal baseline of improvements — the installation of Harpoon and Tomahawk missiles and the necessary fire control, Phalanx self-defense systems and RQ-2 Pioneer drones.

The installation of the flight deck and missile silos would have to wait. They were again suggested in the late 1980s, but for one reason or another, mostly coming down to cost and the Cold War winding down, the Navy got cold feet. By 1992 all four ships would be decommissioned.

People gather on the beach to see the battleship USS Missouri (BB 63) enter the channel into Pearl Harbor, Hawaii, on June 22, 1998. Secretary of the Navy John H. Dalton signed the Donation Agreement on May 4th, allowing Missouri to be used as a museum near the Arizona Memorial.Photo via DoD

In hindsight, the Interdiction Assault Ship concept might have had a difficult time fitting in with U.S. military operations in the 1980s. Among operations in the Persian Gulf, Grenada, off the coast of Lebanon and Central America, there was no operation in which the IAS was a “must-have”. An amphibious ship could do the job or a battleship, but a compromise of both — with the inherent shortcomings of a compromise — would not have brought anything particularly compelling to the table.

The IAS was a big stick for big wars — chasing down the Kirovs and other heavy Soviet surface combatants in World War III, supporting U.S. Marines in Norway, then executing the Maritime Strategy and joining the carrier fleets in attacking Soviet bases above the Arctic Circle. In this scenario, the IAS’s real innovation — a field of 320 missile silos — would be a “must-have”. The ability to fire off salvoes of 16-inch shells and Tomahawk missiles at land targets, especially Soviet air defenses, would have been a godsend to the aircraft carriers and aircrews who would have had to fly combat missions over the Soviet Union.

Today all four Iowa-class battleships are scattered across the United States serving as floating museum ships. New technologies such as lasers and railguns will almost certainly spark a new wave of calls for reintroducing the ships with 21st Century technologies. While unlikely in the current fiscal environment, such a possibility shouldn’t be completely ruled out. The Iowa class keeps coming back, and still may yet again.