The mother of the Navy sailor who was sentenced to one year in federal prison for illegally taking pictures aboard... 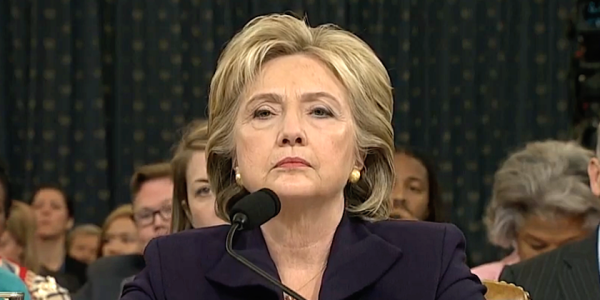 The mother of the Navy sailor who was sentenced to one year in federal prison for illegally taking pictures aboard a U.S. nuclear submarine is speaking out about her son's case, saying she wants Democratic presidential candidate Hillary Clinton to be held to the same, if not a higher, standard as her son.

During an interview on Friday, Kathleen Saucier repeated what she's told her son and others: that while speaking out can't change his sentence or what happened, “maybe it'll make people realize there's a double standard.”

Related: Why Clinton’s Emails Shouldn’t Be Compared To Petraeus’ Case »

The Justice Department in July formally closed its case into Clinton's use of a private email server and did not bring criminal charges against her.

In August, U.S. District Court Judge Stefan Underhill sentenced Kristian Saucier, a machinist's mate who served on the USS Alexandria, which previously was based in Groton, to one year in prison and six months home confinement for retaining defense information without authorization, a felony charge.

Kristian Saucier took photos of classified spaces, instruments and equipment on at least three occasions in 2009.

He pleaded guilty in May to taking six photographs, all of which are classified as “confidential/restricted,” the lowest of the three classification levels, which pertains to information that is “reasonably assumed” could cause damage to national security.

Underhill emphasized several times before sentencing Kristian Saucier that federal sentencing guidelines were not helpful in the context of his case, and that he didn't believe that the sailor had any intent to distribute the photos.

The discharge could cost him his Department of Veterans Affairs benefits.

His mother said Kristian Saucier told her that he took the photos so that he could have a keepsake of his time in the Navy, and that he never intended to distribute or sell the photos.

His lawyer argued the same in court filings and proceedings.

According to the government, after being interviewed by the FBI and the Naval Criminal Investigative Service, Kristian Saucier destroyed a laptop computer, a personal camera and the camera's memory card.

His mother said he did so because he was “freaked out.”

Kathleen Saucier said she knows what her son did was wrong and that the investigation “started in the right way” with officials “checking into something that looked suspicious,” but she feels prosecutors became overzealous and wanted to make an example out of her son.

She also disagreed with an argument made by the prosecution during her son's sentencing, that he and his ex-wife made an “impromptu” trip to Cancun in 2009 and he brought his cellphone with the classified pictures with him even though he didn't have international service, and that he left his ex-wife for several hours to go for a walk on the beach.

Kathleen Saucier said she has a time share in Cancun, which she had visited a month before, and suggested her son and his ex-wife make a trip there. She also told him that she was able to get spotty text messaging service while there so that he and his ex-wife might be able to contact the ex-wife's son who was staying with the boy's father while they were gone.

Kathleen Saucier talks daily to her son, who turns 30 on Saturday, and said that he has been doing as well as could be expected, considering the situation. He's been spending time with his young daughter and other family members before he starts his prison sentence, she said.

He has been on home confinement since being released on May 28 on a $100,000 bond, and has been under a 7 p.m. to 7 a.m. curfew. He's only been allowed to leave for work at the Naval Support Activity Base in Saratoga Springs, N.Y., where he sat in a room alone, his mother said.

Kathleen Saucier described her son as being in the top 10 percent of his class at his Florida high school, and said that he could've had his choice of colleges, but chose to serve his country instead.

She said he interned for a judge while in high school because he thought he wanted to be lawyer, and that he memorized his school's code of conduct and would stand up to teachers who weren't abiding by the code.

Kristian Saucier has been ordered to report to prison on Oct. 12. He has not yet learned in which prison he will be serving time, his mother said.

Judge Underhill said at the sentencing that he would recommend to the Bureau of Prisons that Kristian Saucier be placed in a low-security prison and in a camp as close as possible to his family.