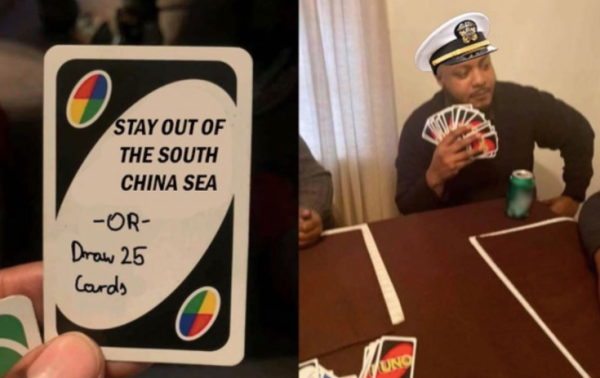 The US Navy tweeted Sunday that it is “not intimidated” by China's weapons after Chinese media boasted about Beijing's “carrier killer” missiles in response to the presence of two US Navy carrier strike groups in the South China Sea.

The Nimitz and Ronald Reagan carrier strike groups are conducting dual carrier operations in the contested waterway, over most of which Beijing claims sovereignty. The last time the US had two aircraft carriers operating in the South China Sea was nearly six years ago.

On July 4, a B-52 Stratofortress bomber from Louisiana linked up with the carriers for combined operations.

A #B52 bomber from Louisiana took off from home station on July 4th and participated in a maritime integration exercise with two aircraft carrier strike groups in the South China Sea before landing at Andersen Air Force Base, Guam. pic.twitter.com/GjxAJTx0bf

The Global Times, a nationalist Chinese tabloid, argued Sunday that the “South China Sea is fully within the grasp of the Chinese People's Liberation Army,” and “any US aircraft carrier movement in the region is solely at the pleasure of the PLA.”

The incendiary paper pointed to Chinese anti-ship missiles, specifically the DF-21D and DF-26.

The US Navy responded on Twitter, writing that it is “not intimidated” by the Chinese arsenal and that the carriers are there “at our discretion.”

And yet, there they are. Two @USNavy aircraft carriers operating in the international waters of the South China Sea. #USSNimitz & #USSRonaldReagan are not intimidated #AtOurDiscretion https://t.co/QGTggRjOul

The Navy has repeatedly stressed that it plans to continue to operate in the South China Sea despite opposition from Beijing, a point it drove home with a meme on Instagram Sunday.

Beijing sharply criticized the dual carrier operations Monday, with the Chinese Foreign Ministry accusing the US of flexing its muscles to “undermine the peace and stability in the South China Sea.”

The two US Navy carrier strike groups were operating in the waterway at the same time Chinese naval forces were conducting military drills near the Paracel Islands, disputed territories China seized from Vietnam.

China has since constructed military outposts in the area. As China attempts to cement its sovereignty, the US Navy has repeatedly challenged China's claims, routinely sending US warships to conduct freedom-of-navigation operations in nearby waters. It did this most recently in late May.

The Department of Defense called the Chinese exercises near the Paracels “counterproductive,” characterizing the drills as “the latest in a long string of PRC actions to assert unlawful maritime claims.”

The South China Sea has long been a hotbed of tension between the US and China, both of which have stepped up their military activities in the region in recent months.

“The purpose,” the commander said, “is to show an unambiguous signal to our partners and allies that we are committed to regional security and stability.”