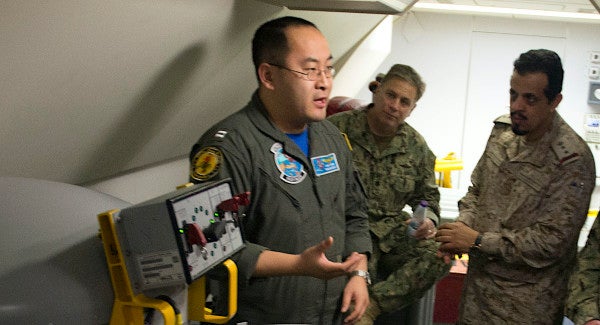 A Navy lieutenant and his wife were arrested in a joint FBI and NCIS raid Thursday in the San Jose area.

The raid occurred at the home of Navy Lt. Fan Yang and his wife, Yang Yang.

Fan Yang was born in China, emigrated to the United States in 1999 as a teenager, and became a US citizen in 2006, according to the documents.

The accusations against the Yangs include conspiracy to defraud the United States, importing and manufacturing firearms, transfer of a firearm to a non-resident and conspiracy to violate federal law (specifically knowing submission of false and misleading export information).

Fan Yang is also charged with illegal possession of a firearm by an alien admitted under a non-immigrant visa. His wife is accused of submitting false and misleading export information and fraudulently trying to export illegal merchandise from the US to China.

The court documents say the couple worked together to assist a Chinese national in illegally possessing firearms between March 2017 and Sept. 2019. The documents indicate the couple lied to hide the true nature of that relationship.

One account in the documents says Fan Yang requested time off from work to take his family to Disney. But investigators say credit cards linked to him and his wife show flights purchased to Sioux City, Iowa and a meal bought in Sioux City, Nebraska the weekend they were reportedly at the amusement park.

That same weekend, documents say a one-way flight to an airport 100 miles away from Sioux City, Nebraska was also purchased by Fan Yang for the Chinese national.During an interview, Fan Yang denied that he and his wife had contact with a foreign national in the last seven years, documents said. He also denied any foreign financial interests despite records showing them having a Bank of China Account.

According to documents, the Chinese national is the chairman of a Shanghai company named Shanghai Breeze Technology Co. From Nov. of 2016 through Aug. of 2019 approximately $205,000 were wire transferred between Shanghai Breeze and BQ TREE, LLC. On business cards obtained by the FBI, Yang Yang is listed as the chief consultant and Fan Yang as a consultant for BQ TREE, LLC.

The Yangs moved into their home on Salamanca Ave. in July and according to neighbors have kept to themselves. Neighbors were surprised to see investigators show up at the house.

“I'm kind of shocked!” Anthony Vaz said. “Because the chance that this is something big.”

Vaz lives behind the Yangs and he says the only time he had contact with them was when he received a letter from them that they were building a fence around their property. With numerous felony charges, the Yangs could face fines and jail time. Fan Yang could also be released from the Navy and stripped of his security clearance.