In order to fund a high-stakes poker habit and buy luxury vehicles and a second home, a naval officer based in Virginia Beach helped swindle the government out of $2.7 million, according to federal prosecutors 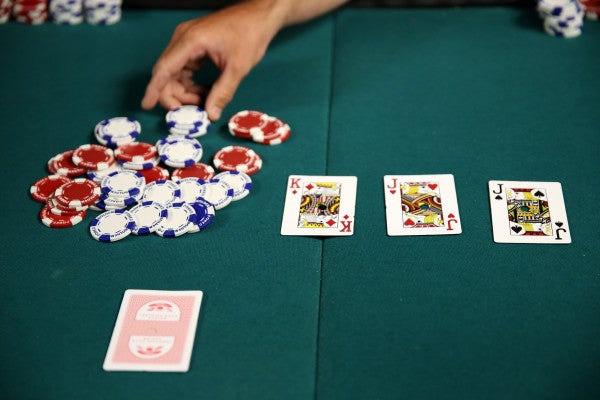 In order to fund a high-stakes poker habit and buy luxury vehicles and a second home, a naval officer based in Virginia Beach helped swindle the government out of $2.7 million, according to federal prosecutors.

Lt. Randolph Prince, 45, was sentenced this week to more than four years in federal prison.

The prosecution asked for 7½ years, while the defense asked for two.

“It's a shame that he squandered an otherwise outstanding 27-year Naval career,” defense attorney Shawn Cline said in an email. “He suffered from a terrible gambling addiction and abused a position of trust to fuel that addiction.”

Prince, a member of of Explosive Ordnance Disposal Training and Evaluation Unit 2, pleaded guilty in August to wire fraud and making a false statement on his 2014 tax return.

According to court documents, Prince, as a member of his unit's supply staff, steered government contracts to three sham companies that were run by his friends. They were selling the Navy “inert training aids,” or fake bombs, that were never shipped but marked as delivered.

Among his co-conspirators were Lt. j.g. Courtney Cloman, a naval flight officer, and Clayton Pressley III, a former sailor. Both have pleaded guilty to participating in the fraud.

Pressley, who netted more than $644,000 from the conspiracy, was sentenced last year to two years in prison. That is on top of four years and two months he received for stealing the identities of his subordinates in an unrelated federal case.

Cloman is set to be sentenced Feb. 7.

Shawn Cline, Prince's attorney, argued Pressley was the scheme's true leader. He said Pressley developed the plan and recruited Prince and others to participate.

Assistant U.S. Attorney David Layne acknowledged Pressley — a Bronze Star recipient — helped form one of the firms involved in the scheme and assisted in its operations. But, he said, the scheme involved two other sham companies.

In court documents, Cline asked the court for leniency in light of his client's lengthy military record. Prince enlisted in 1991, at the age of 18, and was commissioned in 2008. He became a lieutenant in 2012.

“When his time in service is remembered, it won't be for the fact that he rose from the lowest enlisted ranks to the grade of Lieutenant, or that he served in a dangerous war zone in direct combat when his nation needed him most. It will be the events of this sentencing hearing that are his legacy,” Cline wrote. “Rather than being something with which he can look back on with pride, he will spend the rest of his life hoping that the people with whom he interacts are not aware of the time he spent serving in the Navy.”

Layne said Prince still deserved a lengthy sentence. Prince, he noted, controlled the fraud from beginning to end — both steering the fraudulent orders to the sham companies and also telling the Navy the shipments had been delivered when they had not.

“The greed underpinning Prince's activities is shocking, and his actions were impressively calculated,” Layne said.