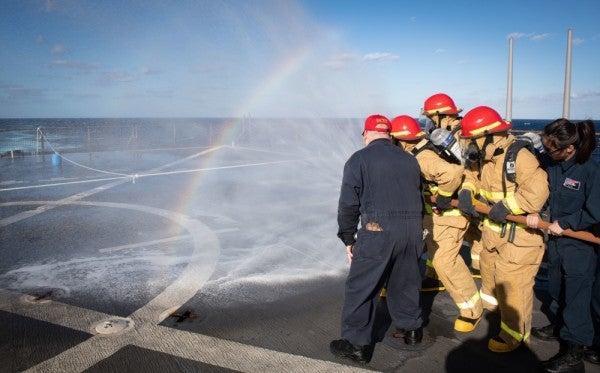 According to the complaint filed Tuesday, the plaintiff “has served two extended tours of duty as a Surface Warfare Officer, earned multiple advanced degrees, and deployed around the world.”

The officer, whose identity hasn’t been disclosed to protect her privacy, served the country for nine years, and “hopes and intends to serve the United States for many more years and aspires to continued advancement and leadership as a Navy officer.”

However, since Trump announced in a series of tweets in July 2017 his plan to reverse a decision by then-President Barack Obama ending a longstanding military ban on transgender troops, her dreams of serving and protecting the country she loves came to a halt.

According to the suit filed by attorneys with the Transgender Rights Project Director at GLBTQ Legal Advocates & Defenders (GLAD) and the National Center for Lesbian Rights (NCLR) on behalf of the plaintiff, the ban, which went into effect on April 12, 2019 constitutes “textbook invidious discrimination.”

“We are asking the court to prevent this senseless result for our client, so that she can continue to use her years of training and expertise to benefit our country,” Shannon Minter, NCLR’s legal director, said in a statement.

The officer, who’s stationed in Massachusetts, came out as transgender after the ban went into effect, which means she’s not protected by the “grandfather clause” that allows transgender troops to serve, if they came out before the ban — which mandates the discharge of any service member who comes out as transgender and seeks to undergo a gender transition.

The case marks the first legal challenge to the ban since its implementation.

“As an experienced officer, all she seeks is the ability to continue serving her country on the same terms as others,” Jennifer Levi, GLAD’s transgender rights project director, said in a statement.

“Our current national emergency is a reminder, if we needed any, how critically important it is that the institutions upon which we all rely make decisions based on evidence and competency,” she added.

Minter, added that the “plaintiff’s situation highlights the serious harms the ban is causing to dedicated service members and to the military,” she said.

“The current policy mandates the discharge of any transgender service member, without regard for their fitness or value to the military, and even when replacing them would be extremely costly and disruptive,” she added.