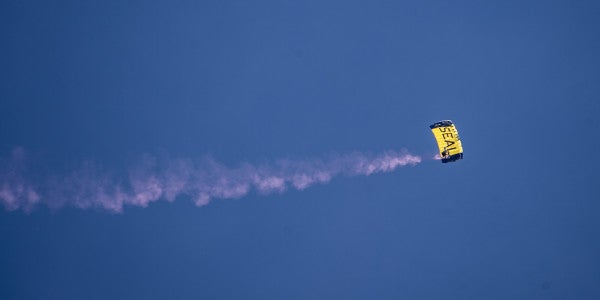 A tragic parachute malfunction sent a member of the Navy's elite SEAL parachute team plunging into the Hudson River on Sunday in what would become a fatal accident, according to Navy officials.

The team was in New York City for the annual Fleet Week event.

Leap Frog performances typically feature six parachutists who jump from an aircraft at heights of up to 12,000 feet. Their demonstration feature smoke canisters, canopy formations, and sometimes streamers or flags.

The parachutist, who has not been identified, was pulled from the water immediately by Coast Guard personnel who were standing by the support the demonstration, according to the announcement. He was then taken to Jersey City Medical Center for treatment. He was pronounced dead there at 1:10 p.m., an hour after the jump.

“Our hearts and prayers go out to his family, and I ask for all of your prayers for the Navy SEAL community who lost a true patriot today,” Rear Adm. Jack Scorby, Commander, Navy Region Mid-Atlantic, said in a released statement.

The tragic death remains under investigation. Navy officials say the jumper's name is being withheld until his family members have been notified.