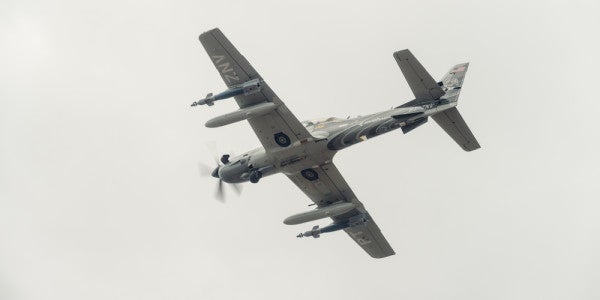 The Navy has identified a pilot killed during a tragic A-29 Super Tucano crash that took place Friday during flight demonstrations for the Air Force's light attack experiment.

Lt. Christopher Carey Short, originally from Canandaigua, New York, was piloting the A-29 when it crashed over the Red Rio Bombing Range within White Sands Missile Range, New Mexico.

Air Force officials did not disclose Short's death in earlier announcements, remaining silent on the matter for nearly 36 hours prior to the Navy's news release late Saturday night. Officials previously only disclosed that there were two pilots in the A-29, and one was airlifted to a local hospital with minor injuries.

The cause of the crash is now under investigation, according to the Navy release.

The deadly mishap, which took place north of Holloman Air Force base, happened in the middle of testing to determine whether the Air Force will select the Textron Aviation AT-6 Wolverine or the Super Tucano, made by Sierra Nevada/Embraer, to make up its planned fleet of light attack aircraft.

Demos began at Holloman May 7 and are slated to run through July, with service officials including Air Force Secretary Heather Wilson and Air Force Chief of Staff Gen. David Goldfein expected to participate and take flights in each aircraft.

Officials told Military.com Friday that flights associated with the light attack effort were canceled for the remainder of the day at Holloman following the crash. It remains unclear how this incident could affect scheduling or planning for the ongoing light attack effort.