In the latest frightening example of cockpit problems in high-performance military aircraft, the Navy is investigating a recent incident in … Continued 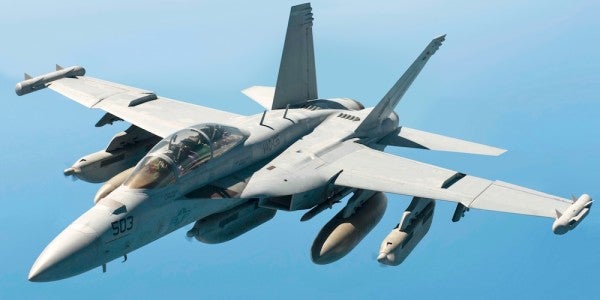 In the latest frightening example of cockpit problems in high-performance military aircraft, the Navy is investigating a recent incident in which the cockpit temperature of an EA-18G Growler reportedly plunged to minus 30 degrees Fahrenheit. Ice coated flight instruments and windows, forcing the plane’s two-person crew to land using a Garmin watch and spoken instructions from air controllers.

Defense News, which first reported the incident, said the crew suffered serious injuries from frostbite, including severe blistering and burns on their hands.

The jet, which specializes in jamming enemy electronics, took off Jan. 29 from Naval Air Station Whidbey Island in northern Washington and was bound for the Naval Air Weapons Station China Lake near Ridgecrest, Calif., where the aircraft is based, said Cmdr. Ron Flanders, Naval Air Forces spokesman.

The crew received a warning that the environmental control system that supports cabin air quality and temperature was icing, according to Defense News. Citing sources familiar with the incident and an internal report it obtained, the trade publication said a mist pumped into the cockpit and iced over windows and flight instruments, rendering the pilot and the plane’s weapons system officer “almost completely blind.”

The crew was able to successfully land the plane back at Whidbey Island, Flanders said. One of the crew members has since “returned to a flight status,” meaning they are cleared for flight. The other flier has not yet been cleared, though they, too, are “expected to make a full recovery,” he said.

Flanders said he could not provide further details of the flight or the reported injuries due to the Navy’s investigation into the matter and patient privacy laws. Results of the investigation will determine whether further action is necessary, he said.

A spokesman for the Boeing Co., which builds the F/A-18 E/F Super Hornet and its derivative, the EA-18G Growler, said the company could not comment on this specific incident or the environmental control system because of the Navy investigation.

The incident with the Growler is the latest in-cockpit flight issue the U.S. military has dealt with. Pilots have reported oxygen deficiency, also known as hypoxia, while flying a variety of fighter planes, including the F/A-18 E/F Super Hornet, the F-22 and the F-35A.

Modern fighter pilots don’t get enough oxygen in their bloodstream when flying at high altitudes, meaning that the aircraft must produce its oxygen on-board during flight. Pilots breathe that oxygen through a mask.

Last year, the Navy set up a physiological event action team to identify and find solutions to so-called physiological episodes, which include hypoxia and other conditions.

Analysts said the Growler incident seemed to be an unusual failure of the environmental control system. An industry official said various companies, including Northrop Grumman Corp., Parker and Honeywell, manufacture a series of valves and regulators for the system.