While most Americans will celebrate Thanksgiving at the home of family or friends, many sailors in Hampton Roads will spend... 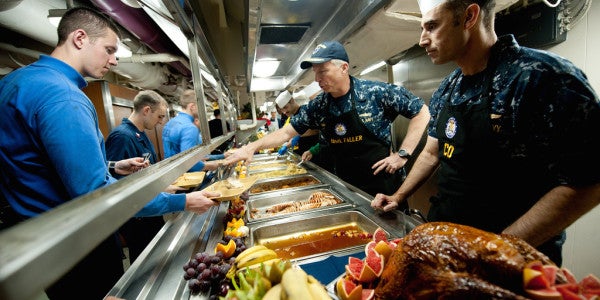 While most Americans will celebrate Thanksgiving at the home of family or friends, many sailors in Hampton Roads will spend the day standing duty aboard their ships.

The Navy wants to ensure those crews and their loved ones don't miss out on a traditional Thanksgiving dinner. But feeding an entire fleet one special meal is no easy task. For the culinary specialists aboard the aircraft carrier USS George H.W. Bush, Thanksgiving is their Super Bowl.

Cmdr. Jason Adams, the Bush's supply officer, walked The Virginian-Pilot through what it takes to plan Thanksgiving dinner aboard one of the world's largest warships.

Step 1: Get a head count

In September, each ship estimates how many people will be working on Thanksgiving. Ships in port will have fewer people aboard than those at sea.

The Bush, which can have as many as 5,000 people aboard when it's deployed, will likely serve about 400 sailors on Thanksgiving. Those sailors can invite family members to join them, so the ship is planning on feeding up to 550 people.

Each ship then sends its head count to Naval Supply Systems Command in Mechanicsburg, Pa.

Naval Supply Systems Command is responsible for setting the menu and ordering the Thanksgiving meal for the entire fleet. This year's menu includes turkey and gravy, ham, green bean casserole, shrimp cocktail, sweet potatoes and an assortment of pies.

It contracts with local vendors to provide and deliver the food. Sysco is the food contractor in Hampton Roads. The food has to be ordered 21 days in advance.

Sailors often eat in the same windowless space every day. To make it feel a little more special, the Bush orders seasonal decorations that give the mess decks a fall feel. That includes pumpkins, bales of hay, scarecrows, and holiday-themed napkins and banners.

Those were scheduled to arrive aboard the ship on Nov. 16. The decorating was set to begin the day before Thanksgiving, Nov. 22, and includes freshly pressed linens and serving plates as well as a reconfigured serving line to accommodate a larger-than-normal crowd.

Culinary specialists aboard the Bush begin preparing the Thanksgiving meal days in advance. They start thawing frozen items three days earlier, on Monday. That's also when they'll start to make cornucopias out of bread by using a wire frame that the dough hangs from as it bakes. Some will be used for display with fruits inside of them, while others will be eaten.

On Wednesday, the day before Thanksgiving, they bake cornbread that's used for a special stuffing. That's also when they boil the shrimp. Salads are made that evening.

The turkeys will be seasoned and start going into ovens about 3 a.m. on Thanksgiving day. That's also when the cooks will start roasting prime rib.

While that's going on, they're also preparing a light breakfast for the crew that may include grab-and-go breakfast burritos. The idea is to let the cooks focus on Thanksgiving rather than cooking eggs.

Dinner is the same as lunch. Adams calls it a “re-attack” instead of seconds. It's served from about 4 to 6 p.m.

Everything will be cleaned up and reset by about 8 p.m. From there, the cooks will start working to get breakfast ready for the next day.