Hours after the incident, the town announced it would lift the ban on beach access. At least 24 people in the county tested positive for COVID-19 and two have died as of Friday. 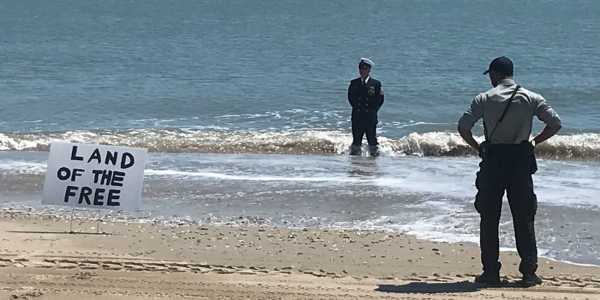 A man wearing the US Navy uniform went to the oceanfront in Emerald Isle, North Carolina, on Thursday, in an apparent protest against the town's restrictions amid the coronavirus pandemic.

The man, who was identified by a witness as a retired US Navy chief, was seen photographed standing in front of a sign that read “LAND OF THE FREE.”

Mike Conner, a longtime resident of Emerald Isle and a surfer, told Insider the retired sailor stood in the waters for about 10 minutes before he was approached by law enforcement officers. Conner said the man was asked to remove himself from the area, but refused the request.

The sailor eventually left the water on his own accord without incident, Conner added.

The man wore the full Navy Service Dress Blue, which is made from wool and is allowed to be worn year-round to all official, formal events. The price for the full uniform is well over $300, which includes stitched rank and a service cover.

The man in the uniform and the Emerald Isle Police Department did not respond to a request for comment.

Hours after the incident, the town announced it would lift the ban on access on Saturday. Surfers and other residents previously expressed their disapproval by staging protests throughout the area and were “fired up” by the closures, Conner said.

“We're very happy that Emerald Isle allowed access not just to us swimmers, but to everybody that uses it as a medium for their exercise,” Connor said. “We don't want our rights stomped all over.”

“Emerald Isle residents and property owners will be able to access the Atlantic Ocean for normal activities, including swimming, surfing, kiting, kayaking, and fishing,” the town said in a statement. “Residents can continue to walk, jog, and sit on the beach strand. All beachgoers must adhere to the current social distancing guidelines.”

At least 24 people in the county tested positive for the coronavirus and two have died as of Friday, officials said, according to WCTI-TV.

Other beaches have begun opening as states have eased their stay-at-home restrictions. In Jacksonville, Florida, crowds were seen gathering at the beach on Friday afternoon. Although recreational activities are being permitted at some of the beaches, sunbathing and other group activities will not be allowed during operational hours.