Chief of Naval Operations Adm. Mike Gilday directed the Navy to stand up a group to examine service policies amid the national conversations about race and discrimination 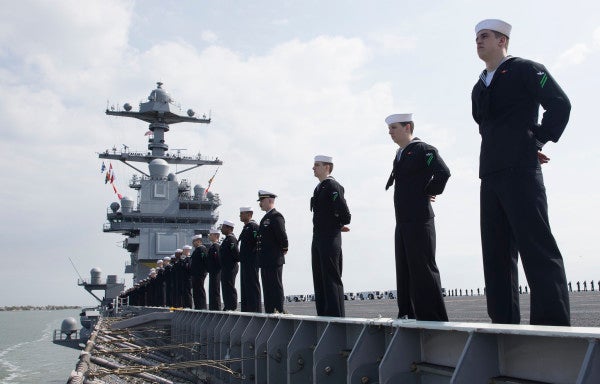 One officer was told to stop speaking Spanish on a ship. Another faced snide comments about her cornrows. A third had a superior speak only to her chief, ignoring her years of professional expertise.

Those are just some of the candid examples of discrimination sailors and officers said they've faced in their careers. The group shared the experiences with members of a new Navy task force charged with identifying racist or sexist policies.

“I think that we should assume that there are barriers everywhere for minorities,” Lt. Destini Henderson, a Black naval flight officer, told the task force Monday. “That was definitely the case for me throughout my Navy career and also even just getting into the Naval Academy.”

Henderson, who said she took heat over the way her hair looked at the Naval Academy, was one of about 10 Navy personnel asked to participate in the first virtual meeting of the newly formed Task Force One Navy. Chief of Naval Operations Adm. Mike Gilday directed his service to stand up a group to examine Navy policies amid the national conversations about race and discrimination.

The group is looking at policies affecting everything from recruiting to promotions and the Navy's criminal justice system. Gilday said he's under no illusion that racism doesn't exist in the service.

The participants agreed. Senior Chief Mass Communication Specialist Leah Stiles said the task force should consider recommending that the Navy adopt a zero-tolerance policy when it comes to racism. The Puerto Rican senior chief petty officer is married to a Black man.

“I've corrected sailors using the N-word around me more than once,” she said. “Not because [I'm] married to a Black man, but because it's wrong. … The punishment should fit the crime.”

Lt. Cmdr. Rolando Machado, another Naval Academy grad, said he felt out of place when he arrived in Annapolis, Maryland. He was one of two Hispanics in his plebe class, said Machado, who serves as the Navy's representative at the Association for Naval Services Officers, a nonprofit that promotes the recruitment, retention and promotion of Hispanics and Latinos in the sea services.

Years later, when Machado deployed as a junior officer, he recalled hearing a couple sailors speaking Spanish. He joined in, only to have a chief petty officer who heard the three berate Machado in front of the two sailors.

“I felt very embarrassed. Ashamed. And at the time, I didn't know what the right thing to do was. I thought I was wrong,” he said. “Come to find out that it's perfectly fine to speak a foreign language in our Navy as long as you're not on watch and you're not executing or giving a direct order.

“But that was a big marking moment for me,” he added.

Chief Warrant Officer LaTresha Williams, one of two Black female boatswains in the Navy, said she experienced racism as recent as 2016, shortly after earning her commission. An officer refused to acknowledge her presence, sometimes speaking to her chief instead of addressing her directly. That was despite Williams having 22 years of experience.

She noticed he didn't have trouble communicating with other female officers, leading Williams to worry that he wouldn't speak to her because she was Black.

“It astonished me, that late in my career, to be experiencing racism or sexism at that point,” she said, though she noted that, earlier in her career, another superior downplayed an instance in which a sailor called her the N-word after telling him to complete a task.

“If we're having this much trouble acknowledging, dealing with and addressing the racism toward African Americans — a very large demographic in the Navy — then all the other demographics that are experiencing any type of racism, imagine how much trouble, how much resistance they're going to feel once they make their issues known,” Williams said.

As Task Force One Navy examines policies and makes recommendations for change, the team plans to hold more virtual meetings where they'll hear from additional sailors and officers.

Force Master Chief Huben Phillips, the task force's senior enlisted adviser, told the sailors and officers who shared their experiences that their input is crucial to ending discrimination in the ranks.

“We want to hear it,” he said. “We have acknowledged that we have an issue in our Navy, and we're getting after it.”