Instructor pilots with an F/A-18 Hornet training squadron in Virginia did not treat African-American pilots-in-training "with appropriate dignity and respect," using discriminatory call signs and having inappropriate and unprofessional discussions about them on social media 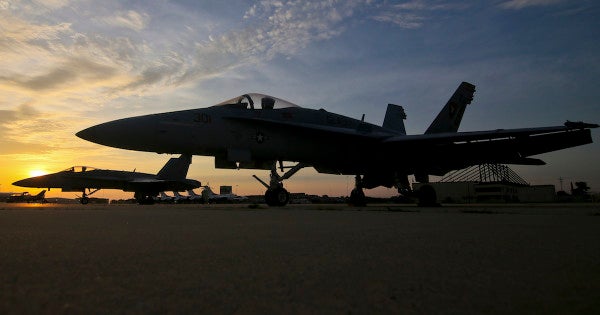 The head of naval aviation has directed the creation of a new process for approving and reviewing pilots' call signs after two African-American aviators at an F/A-18 Hornet training squadron in Virginia filed complaints alleging racial bias in the unit, from which they said they were unfairly dismissed.

In a formal endorsement letter signed May 13, Vice Adm. DeWolfe Miller, commander of Naval Air Forces, said he found the two aviators, a Navy lieutenant and a Marine Corps captain, were correctly removed from Strike Fighter Squadron (VFA) 106 out of Naval Air Station Oceana due to “substandard performance,” despite errors and inconsistencies discovered in the grading and ranking process.

However, Miller said he did find inappropriate conduct by instructor pilots who did not treat the pilots-in-training “with appropriate dignity and respect,” using discriminatory call signs and having inappropriate and unprofessional discussions about them on social media.

He directed the Chief of Naval Air Training to have all training command and fleet replacement squadrons in the Navy formalize a call sign assignment and review process within 90 days, including appropriate peer board representation for minority and female aviators. And he recommended that multiple officers, including a Navy captain, receive rebukes, counseling or administrative punishment for their role in events substantiated by the investigation.

Miller also ordered that VFA-106 receive training on appropriate use of social media and that the unit bring in a “diversity and inclusion expert” to train the squadron on unconscious bias and stereotype threat. Similar training, he wrote, will also be added to the curriculum for prospective commanding and executive officer courses and commander training symposia.

“I intend to invite to assist in the development of the training curriculum,” he wrote. “While it is not the responsibility of these officers to create the solution for the unprofessional and offensive behavior they experienced, it is my hope these officers understand the sincerity of our commitment in addressing unprofessional behavior and will want to join us in this corrective action.”

Miller's decision provides some validation for pilots who for years have pushed the Navy for answers on their treatment and allegations of racial bias.

Military.com first wrote in April 2018 about the two aviators and their dismissal from VFA-106. The Navy pilot, Lt. Courtland Savage, would ultimately leave the service in 2017 and start a new job flying for a civilian airline; the Marine Corps pilot, who asked not to be identified as he remains on active duty, continues to serve as a pilot in a C-130 squadron, having been removed from fighter training in 2016.

While at VFA-106, Savage said he was given the call sign “Radio,” a reference to a movie about a mentally challenged black man. Other black students, he said, got call signs including “8 Ball” and “Kazaam,” the latter a reference to a character played by Shaquille O'Neal.

Other minority pilots in the squadron also gave evidence of race influencing call signs. Another pilot, a lieutenant commander, said he also received the call sign “Radio” at his first squadron in the fleet, but later had it changed to “MC,” short for “MC Hammer,” in reference to a childhood nickname. A commander said his call sign was “Snoop,” in reference to “poor rapping abilities.” And a third pilot, a lieutenant, said his call sign was “Ruby Rhod,” a reference to a Chris Tucker character from the movie “The Fifth Element.” Only one black pilot interviewed had a call sign — “Mr. Bucket” — with no racial connotation.

The two pilots also submitted logs from a WhatsApp chat group called “Pure Bloods,” in which instructor pilots disparaged them and their performance. In the chat, one of the instructors used the eggplant emoji to refer to the Marine pilot. It was a visual representation of a racial slur, the pilot alleged.

“That dude was so bad. I can't even comprehend how someone does not have the most basic level of self-awareness and realize he's going to kill himself or someone else,” an instructor wrote in the chat.

The Marine pilot had also been singled out in the squadron when a significant mishap for which he was responsible — mistaking an instructor's order and blowing the canopy off an F/A-18 — was depicted on a class T-shirt with the slogan, “Once you pop, the fun don't stop.”

A Marine major who was a member of the group and interviewed by investigators was unapologetic.

“That's the price to pay in this community. You do stupid s–t, you get made fun of. Or you kill self/others,” he said, according to the investigation. “His attrition was his small price to pay. Frankly, we did his ass (and the community's) a favor. But his bulls–t makes me professionally embarrassed.”

At the heart of Savage and the Marine pilot's complaints, though, were allegations that they were assessed unfairly compared to their fellow student pilots, and that grade sheets were actually altered after the fact to make their performance appear worse than it was. Both pilots acknowledge they had struggles — Savage in one case “safed” an ejection seat and forgot to re-arm it for takeoff, thus failing the flight — but they said their white peers were given more margin and more chances.

The redacted 17-page investigation, dated August 2018, and the five-page endorsement from Miller, both released to Military.com on Monday, conclude the aviators were struggling in training. But they also substantiate instances where incorrect data and methods were used to evaluate them.

The Marine pilot should have been allowed to be present while witnesses were interviewed for his Field Flight Performance Board, an administrative proceeding to determine his fate as a naval aviator. The FFPB also used grade card data that incorrectly indicated that he was below average in the categories of administrative commands and headwork/crew resource management, the investigation concluded.

He was also disadvantaged by subjective rankings and the decision to route his FFPB for endorsement through two non-aviation commands.

Savage was also found to have been put at a disadvantage by a subjective ranking system, and his Field Naval Aviator Evaluation Board, or FNAEB, the Navy equivalent of an FFPB, had the appearance of being tainted though subjective rankings and the offensive symbols and comments revealed in the “Pure Bloods” group chat.

Despite this, “the preponderance of the evidence clearly indicates that [Savage] was a struggling aviator who received extra attention from the command in order to help him overcome performance deficiencies,” the investigation concluded.

The investigation recommended that new boards be convened for new pilots, using only rankings derived from the official aviator reporting system and using standardized grade sheets and endorsement routing.

Miller, however, disapproved these recommendations. For the Marine pilot, he deferred this decision to Lt. Gen. Steven Rudder, the Corps' deputy commandant for aviation, “for action as he deems appropriate.”

A Marine Corps spokesman, Capt. Benjamin Harrison, said a decision had not yet been made.

“The EO complaints raised by and LT Courtland Savage were fully investigated by the Navy,” Harrison said in a statement. “The Marine Corps will review the investigation and the actions taken during the Field Flight Performance Board (FFPB). It is essential that we ensure all Marines are afforded equal opportunity to achieve their full potential based solely upon individual merit and ability.”

For Savage, Miller noted that he was no longer on active duty with the Navy, and said that “due to sustained substandard performance during the strike fighter syllabus, convening a new board is inadvisable and highly unlikely to result in a different recommendation.”

Both Savage and the Marine pilot received briefings from their respective services on the investigation's findings, officials said.

Multiple naval officers face administrative action in the wake of the investigation. The major from the “Pure Bloods” group who disparaged the Marine pilot was recommended for a non-punitive letter of caution, a finding endorsed by Miller. A Navy lieutenant commander and lieutenant from the group were recommended to receive formal counseling “regarding the appropriate use of text messages/emojis in a professional environment.”

Miller further recommended administrative action regarding a Marine lieutenant colonel and administrative counseling for a Navy captain, both of whose names are redacted in the investigation.

While the Marine pilot declined to comment on the results of the probe, Savage said in a statement that he was “deeply disappointed in the Navy's handling” of the complaint and reviewing all options for how to move forward.

“While the Command Investigation has been completed, I have not yet been provided a final determination. What should have been a 90-day process has gone on for longer than 500 days and remains ongoing,” he said. “Additionally, I have serious concerns about the content of the investigation report and the manner in which the investigation was conducted. I find it troubling that the only conclusions from this review is that call signs need to be changed. There are larger challenges facing minorities and women in Naval Aviation than just being given demeaning and inappropriate call signs.”

Miller also expressed displeasure at the length of time that elapsed between the start of the investigation in January 2018 and its conclusion this month.

“This investigation, covering events which reached back years before the complaints were raised, took over 180 days to complete, and then longer than that to reach final endorsement,” he wrote. “Despite the best intentions of all concerned, and the extensive deliberations required to assess the findings and formulate corrective actions this timeline is unacceptable.”

It's not clear why the investigation languished without endorsement for nearly a year after its completion in August 2018. But after Military.com inquired about the status of the investigation in April, it took roughly a month for the document to be endorsed and released to the pilots. One final delay took place in the final weeks before the conclusion of the process: According to a defense official with knowledge of events, the investigation, previously considered complete, was pulled back for a final review by the office of the Chief of Naval Operations.

“Treating all service members with dignity and respect is something the Navy takes extremely seriously, and if an EO complaint is filed, it is appropriately investigated and, if applicable, appropriate action is taken,” Cmdr. Ron Flanders, a spokesman for Naval Air Forces, said in a statement. “As Sailors, we represent the Navy 24/7. Our core values of honor, courage and commitment apply to all aspects of our life, including online conduct. Any form of harassment, bullying, hazing, stalking, discrimination, retaliation, or any other type of misconduct that undermines dignity and respect not consistent with our core values.”

SEE ALSO: 10 Real Military Call Signs That Are So Bad, They're Great