Growing tensions with Russia have led NATO and its members to make a number of changes to their military posture... 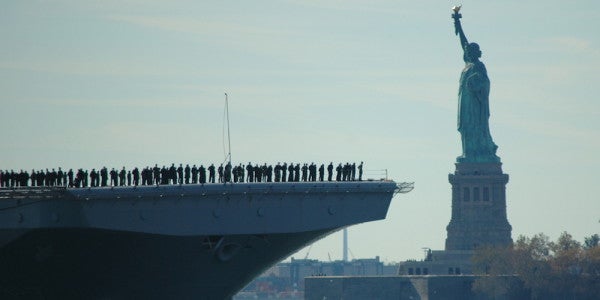 Growing tensions with Russia have led NATO and its members to make a number of changes to their military posture on the ground in Europe, and now the U.S. is reactivating its 2nd Fleet to oversee the northern Atlantic Ocean and U.S. East Coast.

The 2nd Fleet was deactivated in September 2011 after 65 years of service as part of a cost-saving and organizational-restructuring effort; many of its personnel and responsibilities were folded into U.S. Fleet Forces Command. The announcement of its reactivation came during the change-of-command ceremony for U.S. Fleet Forces Command, to which the 2nd Fleet commander will now report.

2nd Fleet's return is part of a shift by the U.S. toward preparing for potential great-power conflict — and to counter Russia in particular.

“Our National Defense Strategy makes clear that we're back in an era of great-power competition as the security environment continues to grow more challenging and complex,” Adm. John Richardson, the chief of US Naval Operations, said on Friday.

The 2nd Fleet “will exercise operational and administrative authorities over assigned ships, aircraft and landing forces on the East Coast and northern Atlantic Ocean,” Richardson said. It will also plan and conduct maritime, joint, and combined operations and train, certify, and provide maritime forces in response events around the world.

The fleet will be activated on July 1 and initially be staffed by 11 officers and four enlisted personnel, eventually growing to 85 officers, 164 enlisted personnel, and seven civilians, according to a memo announcing the change obtained by US Naval Institute News.

Issues such as the rank of the commander and relationship with joint commandant commands remain to be decided.

Also unclear is the future of 4th Fleet, which is the naval branch of U.S. Southern Command set up in 2008, largely to host Coast Guard law-enforcement detachments. Prior to 2008, the 2nd Fleet was responsible for operations in Central and South American waters.

The 'fourth battle of the Atlantic'

Prior to the 2014 seizure of the Crimean peninsula in Ukraine by Russian forces, Navy forces on the U.S. side of the Atlantic Ocean were mainly focused on humanitarian and disaster relief missions as well as drug interdiction.

But Russian naval activity has increased considerably in recent years, with several NATO officials describing it as being at the highest levels since the Cold War (Though Cold War-era intelligence reports indicate that activity is still far short of Cold War peaks.)

Russia's navy is also smaller than it was during the Cold War, but Moscow has pursued ambitious modernization efforts, focusing primarily on the Black Sea and Northern fleets. The latter force, based in and around the Kola Peninsula in the Arctic, represents a significant military force a short distance from NATO territory in Norway and contains Russia's sea-based nuclear forces.

In 2016, U.S. Navy Adm. James Foggo III, who is now chief of Naval Forces Europe, described tensions between Russia and the U.S. as the “fourth battle of the Atlantic,” following the surface and submarine battles of World War I, World War II, and the Cold War.

“Once again, an effective, skilled, and technologically advanced Russian submarine force is challenging us,” he said. “Russian submarines are prowling the Atlantic, testing our defenses, confronting our command of the seas, and preparing the complex underwater battlespace to give them an edge in any future conflict.”

The U.S. Navy has increased its patrols in the Baltic Sea, the North Atlantic, and the Arctic. US Navy ships have also been more active in the Black Sea to “desensitize Russia” to a US military presence there. US and Russian ships have also operated in close quarters in the eastern Mediterranean, where Russian forces are assisting the Bashar Assad regime in the Syrian civil war.

The Navy is also renovating hangers in Iceland to house P-8 Poseidon maritime patrol aircraft there to monitor the Greenland-Iceland-UK gap, a choke point for ships moving between the Arctic and North Atlantic oceans — though that doesn't necessarily mean a permanent presence will be reestablished there.

NATO is making changes to its command structure in response to increased tension with Russia and to prepare for potential military operations on and around the continent.

In March, Germany announced that the proposed NATO logistics command — which would work to streamline the movement of personnel and material around Europe — would be based in the southern city of Ulm.

The other new command the alliance wants to establish would oversee and protect the North Atlantic. In the event of a conflict with Russia, it is responsible for keeping sea lanes open for U.S. reinforcements heading to Europe.