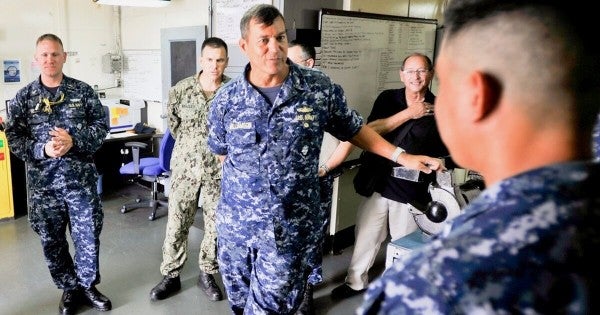 A Navy flag officer has been removed from his job after an investigation found he was having an inappropriate personal relationship.

Rear Adm. Stephen Williamson was relieved as director of industrial operations at Naval Sea Systems Command in Washington, D.C., by Vice Adm. Thomas Moore on Friday. Moore lost confidence in Williamson's ability to lead following an investigation into his personal conduct by the Navy inspector general.

“The investigation found evidence of a consensual, but inappropriate, personal relationship,” Colleen O'Rourke, a spokeswoman for Naval Sea Systems Command, told Military.com. “The NAVSEA commander took administrative action in response to the findings of the investigation.”

No charges have been preferred against Williamson, O'Rourke added. He had served at NAVSEA since September 2017, according to his official bio.

“The Navy expects its leaders to maintain high standards of personal and professional conduct, and holds accountable leaders who fail to meet those standards,” officials said in a Friday statement announcing his relief.

Williamson has been temporarily reassigned to the Office of Naval Research. Information about who replaced him at Naval Sea Systems Command was not immediately available.

In his role as director of industrial operations, Williamson was responsible for getting ships to sea and keeping them ready. He managed four naval shipyards, according to the position description.

Williamson became an engineering duty officer in 1996. His tours as a surface warfare officer included serving as damage-control assistant on the destroyer Lynde McCormick and as first lieutenant on the guided-missile cruiser Long Beach, during which he completed a major overhaul while the ship was in Puget Sound, Washington.

His engineering assignments include supporting Operation Enduring Freedom in Afghanistan during a tour with U.S. Central Command, and serving as director of fleet maintenance for U.S. Pacific Fleet. He also completed tours at NorfolkNaval Shipyard and Naval Surface Forces Atlantic in Virginia.