Navy and Marine Corps divers have recovered the bodies of all 10 missing USS John S. McCain sailors killed in... 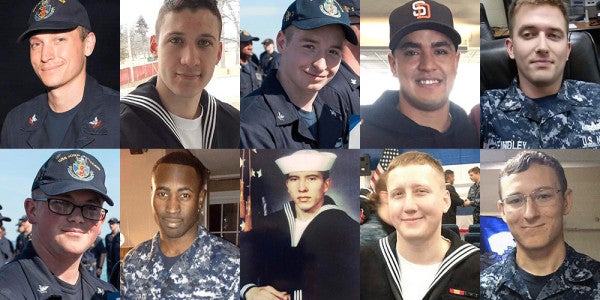 The Yokosuka-based guided-missile destroyer was traveling to Singapore for a routine port visit when it collided with a Liberian-flagged oil tanker, injuring five sailors and leaving 10 missing.

The Navy is investigating the causes of the crash between the destroyer and the Alnic MC merchant vessel that happened Aug. 21 in waters just east of Singapore.

Four of the injured sailors, who had been flown from the ship to a Singapore hospital to be treated for injuries that were not life-threatening, have returned to their unit, the service said last week. The fifth injured sailor did not require further medical treatment after the collision.

Fallout from the collision resulted in the dismissal last week of then-7th Fleet commander Vice. Adm. Joseph Aucoin and a one-day safety stand-down observed by unites across the Navy on an individual basis.

The Navy deployed the amphibious-assault ship USS America to Singapore to aid the McCain crew. The America deployed MV-22 Ospreys and SH-60 Seahawk helicopters to assist with the search as well as divers to search flooded compartments of the ship. The America also helped feed and accommodate the destroyer’s crew.

Navy officials announced Sunday that the America had wrapped up its McCain support and was returning to its scheduled missions. Surviving McCain crew members will continue to receive support from the U.S. military community in Singapore.