Capt. Jim Bryant, a retired submarine skipper, wants the public to see the other 1,681 pages of the Navy's report on the worst sub disaster in American history. 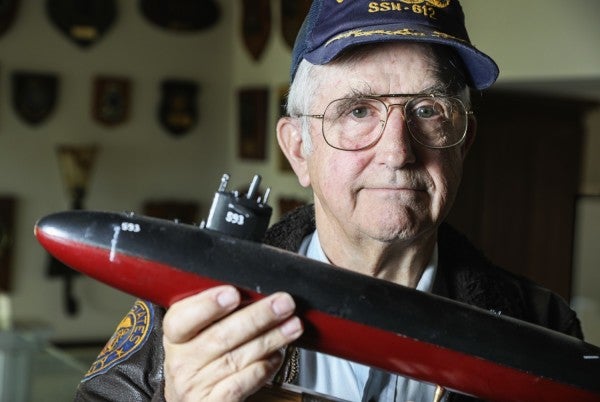 “Experiencing minor difficulties,” it began. “Have positive up angle. Am attempting to blow. Will keep you informed.”

The first and last sentences were unduly — and tragically — optimistic. After a garbled message from the boat at 9:17 a.m., none of the 129 aboard Thresher were ever heard from again. The difficulties had not been minor. They had been fatal, taking the vessel and her crew to a watery grave in the North Atlantic.

Almost 57 years later, this remains the U.S. Navy’s worst undersea disaster. It’s also one of the most mysterious. While there are numerous theories about what caused the Thresher’s sinking, the official story is still under wraps.

The Navy’s investigation resulted in a 1,700-page report. Only 19 pages have been publicly released.

Capt. Jim Bryant, a submarine skipper retired in Point Loma, wants the public to see the other 1,681 pages.

“I feel a responsibility to the men who were aboard,” he said, “and their families.”

Last year, Bryant went to the U.S. District Court for the District of Columbia, seeking to pry loose the report.

On Feb. 10, a federal judge ordered the Navy to release its report in monthly 300-page segments, beginning May 15 and continuing until Oct. 15. When the Navy requested more time to review documents and redact classified information, Bryant’s lawyer noted that the Navy already had promised to do this — 22 years ago. Then, in 2012, the Navy announced it had nearly completed its declassification review but wasn’t going to release anything.

U.S. District Judge Trevor McFadden noted that history this month, while rejecting the Navy’s plea for more time. “Normally I defer to the government,” he said during a hearing, “but I can’t say I have a lot of confidence in how this looks now.”

Bryant, who was in the courtroom for this ruling, is not declaring victory.

“I’m not winning,” he said. “I’ve had a small victory in a very large battle.”

Bryant, 72, is an unlikely foe of the Navy’s “silent service.” Raised in Pasadena and educated at the U.S. Naval Academy, he was a young officer when Adm. Hyman Rickover, the nuclear navy’s demanding leader, tabbed him for submarine duty. Before his retirement in 1994, Bryant served aboard three Thresher-class subs, commanding one, Guardfish, from 1987 to 1990.

These boats were part of the same class as the ill-fated Thresher, yet they were significantly different. Bryant left Annapolis as a young ensign eight years after Thresher had departed Portsmouth, N.H., on its final mission. By the time he was partaking in undersea patrols, the Navy had adopted a new safety program — the acronym: SUBSAFE — and updated the boats’ engineering and nuclear propulsion plants.

Still, Bryant felt a kinship with Thresher, her crew and the loved ones they left behind.

In retirement, Bryant studied archaeology at San Diego City College, piecing together artifacts to understand the native peoples of San Diego’s pre-colonial past. In 2017, he brought the same analytical mindset to a more recent page of history: Thresher.

Early Indian societies proved to be more of an open book than the Navy’s nuclear-powered submarines. Even officially declassified material on these propulsion systems are locked away, out of the public’s sight.

“For example,” Bryant said, “the textbooks they use in Nuclear Power School, with basic physics and basic math, are all classified. For good reason, because you don’t want some other country to come in and steal that information and translate that into Russian or Chinese.”

In 1963, a naval court of inquiry blamed Thresher’s loss on catastrophic flooding from a ruptured pipe. Among those who dispute this theory is Bruce Rule, a former naval officer who eavesdropped on Soviet subs via SOSUS, a top secret network of hydrophones installed on the ocean floor. Now retired, Rule analyzed acoustical data for a 42-page monograph, “Why The USS Thresher (SSN-593) Was Lost.”

Rule concluded that the sub lost power for unknown reasons, then plunged helplessly from 1,300 feet to 2,400 feet below the surface. At that extreme depth, he maintained, the pressure hull collapsed in the blink of an eye — 1/20th of second.

The crewmembers, Rule wrote, “although they knew the event was imminent, never knew it was occurring.”

Bryant found this analysis compelling, but still wanted to see the Navy’s official report. In June 2017, he filed a Freedom of Information Act, or FOIA, request to see Thresher documents. He was ignored. Bryant then pleaded his case in “Declassify Thresher,” an article for the July 2018 issue of Proceedings, the U.S. Naval Institute’s journal. In April 2019, he filed another FOIA request. No response.

On July 5, he sued in federal court.

“Thresher was not on a secret mission,” Bryant said. “We’re talking here about engineering procedures and a mindset that allowed that submarine to sink. So why is the Navy circling the wagons?”

This quest is controversial, even among Bryant’s peers.

“I admire Jim’s persistence, “ said Charles MacVean, a retired Navy captain who commanded the nuclear-powered submarine Seawolf in the 1970s. “But it’s a terrific amount of energy being spent by him and the Navy. I’m not sure it’s going to get us any further up the knowledge chain.”

The Navy, MacVean added, had thoroughly studied Thresher’s loss and corrected the problems: “The lessons learned were taken to heart and inserted into our ships and our methodology.”

Why bring this painful episode back to the surface?

“That’s like asking, ‘Why should we know anything more about the Challenger disaster in 1986?’” Bryant responded. “It’s like saying, ‘NASA knows everything, so we don’t need to know why NASA killed those astronauts when what happened was silly and avoidable.’ Was that a lesson learned?”

Robert Eatinger, Bryant’s attorney, was once a lawyer for the CIA. In that capacity, he was involved in hundreds of Freedom of Information Act appeals, but on the opposite side, seeking to maintain government secrets. Still, he’s unsure why the Thresher report is so sensitive. Even pre-hearing “meet and confer” conferences with the Navy’s lawyers failed to shed light on their concerns.

“The only things they would express,” Eatinger said, “is they need to protect their undersea warriors.”

While Eatinger and Bryant won a court order to see the official Thresher report, it’s unclear whether this victory was large or small. That’s because material deemed essential to national security will be redacted.

“Are the records going to be a lot of blacked-out pages, or a lot of text with very limited redactions?” Eatinger asked. “We don’t know until we see it.”

It may be awhile before these pages can be perused by other interested parties. Bryant, who expects to receive the documents in digital form, plans to review them with an informal committee he’s assembled of retired nuclear submarine experts.

Thresher was lost in a different era, when John F. Kennedy occupied the White House, the Beatles released “Please Please Me,” J.D. Salinger’s “Raise High the Roof Beam, Carpenters” topped best-seller lists and, in the tense aftermath of the Cuban Missile Crisis, Washington and Moscow created a hotline for direct communications. With the Cold War at its frostiest, submarines patrolled the front lines.

“But the Cold War is over,” Bryant said. “That technology is all obsolete. You know, the Soviets knew what we were doing, so why are we so worried now? The Thresher was a self-inflicted casualty.”

Still, some question whether we should probe this wound. They argue that the fatal errors, whatever they were, have been corrected.

“The best people in the country looked at all that data and made changes,” MacVean said. “The country did the best they could at the time they were doing it.”