Editor's Note: This article by Gina Harkins originally appeared onMilitary.com, a leading source of news for the military and veteran... 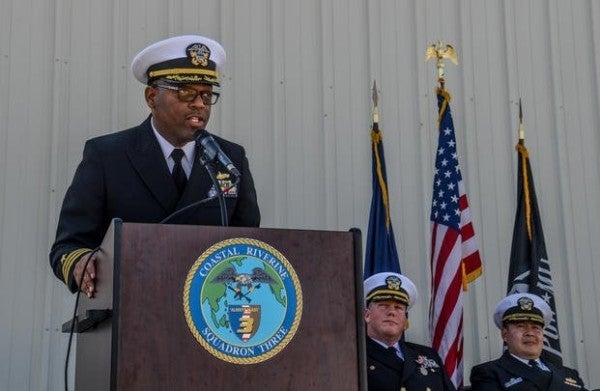 The commanding officer of one of the Navy's coastal riverine squadrons has been fired, service officials announced Thursday.

No additional details were immediately made available as the command investigations associated with this action are not yet complete, Cook said. But commanding officers must meet high standards, she added, and their position requires the utmost in responsibility, reliability and leadership.

“The Navy holds commanding officers accountable in cases where they fall short of those standards,” she said. “… The Navy places tremendous responsibility on the leadership triad of Navy commands, and strives to place its best leaders in those coveted positions. The vast majority of the Navy's commanding officers complete their assigned tours successfully.”

Chestang, a prior-enlisted sailor, led Coastal Riverine Squadron 3 for just over a year. He has conducted mine-clearance operations in support of the wars in Iraq and Afghanistan and previously served aboard the guided-missile cruiser Philippine Sea, according to his official bio.

He completed his master's degree in national security and strategic studies while assigned to Naval War College Newport. His personal awards include the Defense Meritorious Service Medal, the Navy-Marine Corps Commendation Medal and the Navy-Marine Corps Achievement Medal with multiple awards for both.

SEE ALSO: Navy Training Commander Fired 'Due To Loss Of Confidence In His Ability To Command'

WATCH NEXT: The Navy's F-35C Is One Mean Fighter