3 years after an embarrassing incident with Iran, the Navy’s riverine squadrons are ready for a rematch

The 2016 naval incident was embarrassing to the U.S. Navy and its new river patrol force. Three years later, the riverine squadrons have new Mark VI boats and a new philosophy 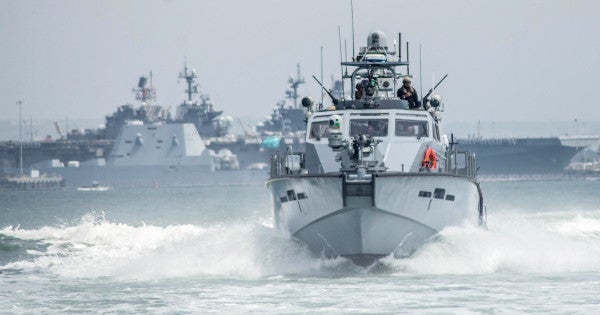 After a day of intensive diplomacy, Iran released the boats and their crews. The incident was embarrassing to the Navy and its new river patrol force. Three years later, the riverine squadrons have new Mark VI boats and a new philosophy, as David Larter explained in July 2019 in an in-depth story for Defense News.

“The RCBs had four mounts that could support a number of heavy weapons to defend the boat,” Larter wrote. “The Mark VI is in another league all together.” The 12 Mark VIs in the Navy inventory boats four .50-caliber machine guns and two 25-millimeter cannons plus 10 sailors per boat.

“We've demonstrated that we can sustain a firefight for 45 minutes in the Mark VI,” Senior Chief Derrick Cox, a riverine trainer, told Larter.

“The new Mark VI has a communications suite that well exceeds that of the RCB,” Larter added. “The new boat can connect with the fleet via Link 16; it also has high- and ultrahigh-frequency and satellite comms so shore side controllers won't lose track of the boat, as happened during the Farsi Island incident. The 85-foot boat has a top speed of more than 40 knots and a range of up to 500 miles.”

The Navy's riverine force is just 13 years old. After a long period without dedicated riverine forces, the Navy stood up three riverine squadrons beginning in 2006. Starting in 2007, the squadrons took turns deploying to Iraq to patrol around the vital Haditha dam in the western part of the country. During initial deployments, the squadrons managed to field just four boats.

The Navy had a huge riverine force during the Vietnam War, but disbanded it following the end of that conflict. The need for new riverine forces was highlighted in the middle years of the Iraq war.

In 2005 the U.S. Army's 25th Infantry Division, deployed around the city of Mosul, struggled to intercept smugglers and insurgents traveling on the Tigris River. The Army improvised its own riverine force, piling heavily-armed soldiers into engineering boats. It was a stop-gap solution, at best.

The Navy's riverine sailors fall under Naval Expeditionary Combat Command headquartered in Little Creek, Virginia. NECC was established in 2006 to oversee the Navy's “other” forces, including construction troops, port-security sailors, bomb squads and other specialists.

The 2016 incident underscored a relative lack of training and discipline in the young riverine squadrons, Larter reported. “Vice Adm. Kevin Donegan, then commander of Fifth Fleet, determined that the Riverine crews were insufficiently trained prior to departing for deployment,” Larter wrote.

“But others argued that Commander Task Force 56 tasked the riverine crews with a mission for which they weren't properly trained — a long, open-ocean transit from Kuwait to Bahrain — and that the sailors had been in theater for months by the time disaster struck, well removed from their training.”

Procedures have improved, Larter reported. “Since the Farsi Island debacle, NECC has worked to close the gaps that contributed to the incident. Up and down the chain of command, the Navy has boosted and improved training and communication.”

Watch standers in the operations centers that lost track of the RCBs as they got lost and bumbled their way into Iranian waters receive more training and are more fully appraised on the individual boat crews — their strengths and weaknesses, and what exactly they've been trained to do.

The turnover process in theater has also been greatly improved and is overseen by both the operational command in theater and by the administrative command, which is responsible for providing a manned, trained and equipped force to the operators. …

The Navy is considering further enhancing the Mark VIs, according to Larter. One possibility: “using the Mark VI as a mothership for swarm attacks in conjunction with new 40-foot patrol boats being introduced to the force; operating unmanned aircraft for over-the-horizon surveillance; operating autonomous wave runners for various missions.”

“We spend a significant amount of time talking about a combat mindset — understanding that contact with the enemy is a plausible scenario that they need to be ready for mentally, physically and tactically,” Cmdr. Mike Ray, head of Coastal Riverine Group 1, told Larter.