The Navy said in its press release that each day starts and ends with an all-hands effort to bleach the ship, an activity the crew apparently calls "bleach-a-palooza." 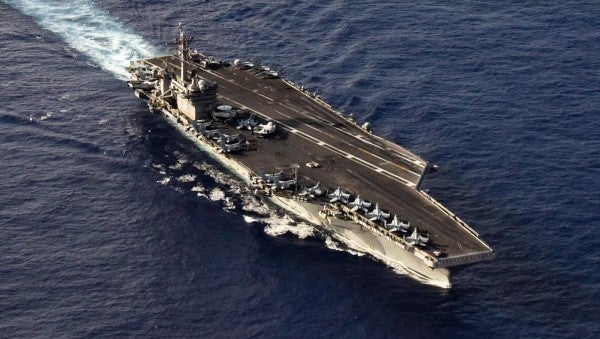 A Navy team has cleaned 80 percent of the coronavirus-stricken aircraft carrier USS Theodore Roosevelt, the officer leading the effort said Wednesday in a service press release.

“We have cleaned over 2,000 spaces so far and have cleaned over 80 percent of the ship,” Cmdr. Chad Hollinger, the weapons officer who leads the cleaning task force, said. “The team's mission is to fully sanitize the ship.”

“To complete the mission,” he continued, “we are going to clean this ship from top-to-bottom and forward-to-aft to create a clean zone for everyone coming back to the ship, so we can get back to business.”

The Navy said in its press release that each day starts and ends with an all-hands effort to bleach the ship, an activity the crew apparently calls “bleach-a-palooza.”

The Navy announced the first few coronavirus cases aboard the USS Theodore Roosevelt on March 24. At that time, there were only three confirmed cases.

As of Wednesday, the number of sailors assigned to the carrier who have tested positive for the virus had climbed to 615, around 12% of the ship's crew and its embarked squadrons and staffs.

Infections aboard the USS Theodore Roosevelt make up more than half of the coronavirus cases among Navy military personnel.

Among the sailors who have tested positive, five are presently in the hospital, with one in intensive care. On Monday, a USS Theodore Roosevelt crewmember died of coronavirus-related complications after being found unresponsive in isolation and placed in the ICU at a local military hospital.

The Navy reports 94% of the crew has been tested, and there have been 3,958 negative results. 4,046 sailors, over 80% of carrier's 4,800 crew members, have been moved ashore in Guam, where the ship was forced into port after the outbreak began.