"I really don't know what a hero feels like. I'm just proud that we saved his life." 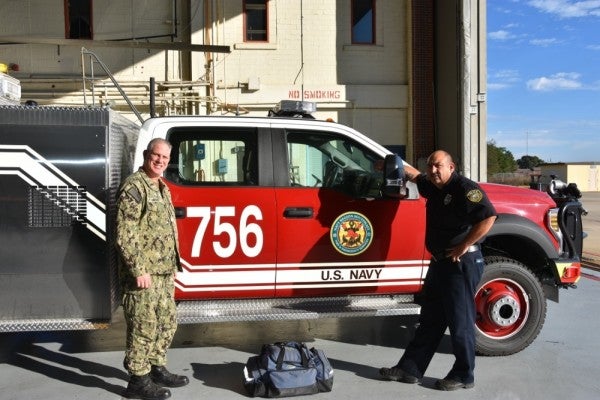 During an evening out with comrades from the 210th Branch Fleet Reserve Association in Milton, Florida, Shane Ammons answered a cry for help.

Ammons, a chief aviation boatswain's mate for the U.S. Navy, was enjoying the Oct. 30 evening when a woman rushed into the front door, according to a news release.

“Does anyone know CPR?” she asked.

“My initial reaction was fear, but I literally jumped out of my flip-flops to help,” Ammons said in the release.

Upon going outside, Ammons and Waller discovered an unconscious man in the driver's seat of a truck, the release said.

Waller said once the pair approached, they saw an unresponsive man who was blue in the face. Since he was a “bigger guy,” Waller said, they decided to perform CPR instead of trying to pull him out of the truck.

They worked as a team, performing chest compressions and rescue breathing until paramedics arrived, the release states.

After five minutes, Ammons and Waller were able to feel a pulse and saw signs of breathing. When paramedics arrived, they informed the duo that the man had suffered a heart attack and their actions had saved his life.

“I really don't know what a hero feels like. I'm just proud that we saved his life,” Ammons said.

Ammons was given a Navy and Marine Corps Achievement Medal for his life-saving actions.

Before joining the Navy, Ammons was an emergency medical technician.

“I take training very seriously,” Ammons said. “We never expect things like this to happen, but we train like it's the real thing.”