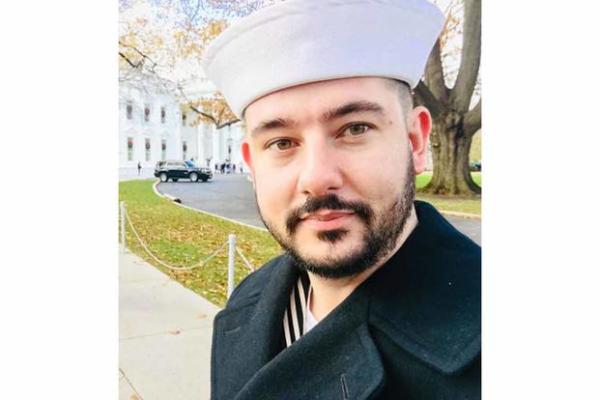 This article by Gina Harkins originally appeared on Military.com, a leading source of news for the military and veteran community

Mass Communication Specialist 3rd Class Leo Katsareas can, for the first time in his Navy career, wear a beard consistent with his religious beliefs while in uniform — at least for now.

The Navy's personnel chief granted Katsareas, a Muslim sailor, a special grooming accommodation to grow his facial hair up to 4 inches long. Katsareas, who converted to Islam at age 16, believes his faith requires him to wear a fist-length beard.

Getting the waiver wasn't easy, though, and it applies only to Katsareas' current assignment as an auxiliary security force member with the aircraft carrier George Washington. Once the petty officer moves on to a new duty station, he said, the special accommodation can be overturned.

“The ongoing threat of being required to immediately shave places pressure on my religious beliefs,” Katsareas told Military.com. “Across the board, an accommodation geared toward a career rather than a single duty would better recognize the importance of religion to many sailors.”

Related: You Can Now Grow A Beard And Get Stoned AF In The Canadian Military

Eric Baxter, an attorney with the Becket Fund for Religious Liberty who helped Katsareas obtain the waiver after it was previously denied, said the Navy has failed to keep up with other branches' policies when it comes to religious grooming standards waivers.

The Army in 2017 made it easier for soldiers to get religious appearance accommodations. The Air Force did the same in 2020, giving airmen with religious or medical exemptions the ability to grow 2-inch beards.

“Of course, when serving in the military, you sacrifice some of your rights,” Baxter said. “But you don't have to sacrifice all of your rights. The military should do everything it can to protect the religious liberties of those who defend our freedoms.”

The Navy declined to comment on the specifics of Katsareas' waiver, citing privacy concerns. In March, the service updated its processes for religious accommodations, giving the first O-6 in a sailor or officer's command the ability to approve some waiver requests.

But all recommendations for beard waivers — whether approvals or denials — must be forwarded to the chief of naval personnel, the instruction states.

“The change created greater transparency in the request process and ensured we have a fair and equitable process for all,” said Cmdr. Dave Hecht, a CNP spokesman. “Our policy provides sailors with a streamlined procedure to request waivers of grooming policies to accommodate religious practices.

“All sailors are welcome to request a waiver in order to observe religious practices,” he added. “We value the diversity in our force, to include our sailors' religious preferences.”

Related: A definitive ranking of the best war movie beards

An approved religious grooming accommodation lasts for the duration of a service member's career, Hecht said, but it's still subject to review — and therefore suspension or revocation — whenever there's a change in mission, duty or work environments.

Katsareas said he sees that as a downfall of the Navy's policy. He hopes his case will encourage officials to look for ways to better accommodate sailors' religious beliefs long term.

“For too long, sailors like me have had to choose between serving our country and expressing our deeply held religious beliefs,” he said. “… Recognizing and appreciating our nation's diversity of religious views, reflected in its sailors, will lead to a stronger and better Navy. That's a win for everyone.”

The petty officer was previously given a temporary no-shave waiver known as a “chit” while serving at sea and another accommodation at his last duty station, which allowed him to grow a quarter-inch beard.

The Navy has previously cited safety concerns when it comes to beards — especially at sea, where personnel might have to don emergency equipment to fight fires or respond to other crises. The service's top personnel officials said in November they would consider allowing sailors to grow facial hair when they aren't at sea, but there has been no policy change yet.

Baxter said Katsareas has previously worn safety equipment with facial hair and hasn't had any issues. The government has an obligation, he added while citing the Religious Freedom Restoration Act, to ensure its rules for safety are enforced in the way that's the least restrictive on one's religion.

Katsareas said he's willing to shave in the event of an emergency, but is grateful the Navy is recognizing his right to practice his religious beliefs without sacrificing military preparedness.

The Navy recently stood up a task force that's examining a host of service policies and practices to ensure no sailors are placed at a disadvantage due to their race, gender, religion or sexual orientation. Hecht said grooming standards, which include facial hair policies, is one of the areas being reviewed.

The Navy only benefits from diversity in the ranks, Katsareas said.

“Minorities, who might not otherwise enlist, can bring an insight to communities around the world … and will ultimately allow us to carry out our mission more effectively,” he said.