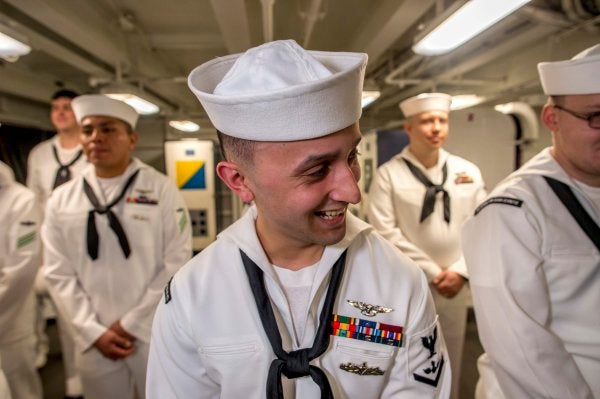 Using his military discount, a Norfolk-based sailor bought and resold 23 firearms for profit, according to court documents.

Pino, who was honorably discharged from the Navy in December, was sentenced Monday to 2½ years in prison.

“The defendant bought and re-sold firearms so many times that, unsurprisingly, he sold some firearms to prohibited people, including a juvenile, a drug-addicted armed robber, a drug dealer trafficking in stolen firearms and many others,” Assistant U.S. Attorney William B. Jackson said in court documents.

According to court documents, Pino's scheme stretched from Nov. 6, 2015 through January 21, 2017. Prosecutors said he illegally engaged in the business of dealing firearms without being a licensed dealer.

In all, Pino, now 26, purchased at least 60 firearms during that time before advertising them on www.VAguntrader.com and www.armslist.com.

Court documents outline one particular sale of a .40-caliber Glock Model 23, which he purchased March 12, 2016, from the Marine Corps Exchange in Norfolk. The original sale price was $439.99.

In the process, he signed a Bureau of Alcohol, Tobacco, Firearms and Explosives form in which he said he was the actual buyer and transferee of the weapon even though he had no plans to keep it, documents said.

Less than three hours after the purchase, a potential buyer responded to an advertisement for the weapon. Later that day, he sold it to the person for $550, documents said.

Assistant Federal Public Defender Keith Kimball said his client tried to be careful about who he sold the firearms to, but obviously failed.

“Mr. Pino has no criminal history and did not seek to put guns in the hands of people who would use them to commit crimes,” he said, lamenting how his client now realizes he exercised “extremely poor judgment.”

Regarding a Dec. 16, 2015 gun sale in Maryland that involved a 16-year-old boy, Kimball said his client didn't know the buyer's age at the time.

Jackson countered that ATF agents told Pino not to buy firearms to immediately resell them and that he didn't listen.

“Despite repeated warnings by ATF agents, he continued to sell guns without a license, even after telling them that he would stop,” Jackson said as he argued for a sentence of more than three years in prison.

Kimball asked the court to sentence his client to probation. He said Pino, who is married with an 18-month-old son, enlisted in December 2012 and was most recently stationed on the aircraft carrier George H.W. Bush.

“Mr. Pino had planned to make the Navy a career, but the instant offense ended his plan,” Kimball said.

SEE ALSO: 2 Army EOD Soldiers Indicted For Allegedly Trying To Sell Guns And Explosives They Knew Would Be Sent To Mexico