Navy Seaman David Miller was awarded the Navy and Marine Corps Commendation Medal on April 26 for stopping a woman with a handgun during an Easter Sunday church service in San Diego, California 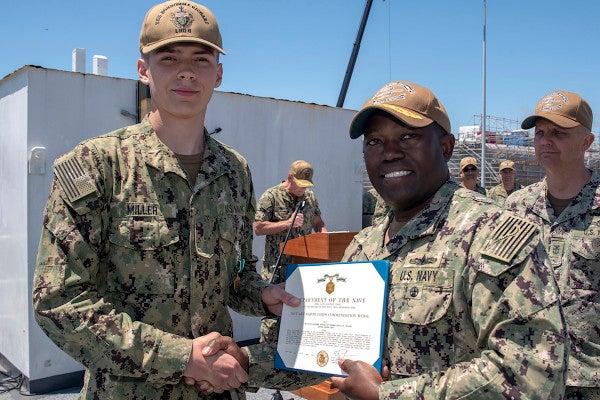 SAN DIEGO — A few minutes after arriving at for services at Mt. Everest Academy in San Diego on Easter Sunday, Salem High graduate and Navy Seaman David Miller found himself in a precarious situation.

A woman stood with a child, brandishing a handgun at the front of the church, he said.

Miller recalled the pastor ushered people out of the church. Miller and a few others stayed, trying to sooth the situation.

It wasn't working, he said.

“I saw an opening and I tackled her,” along with one other man, Miller said. Another man standing nearby grabbed the child, he said.

For his service that day, Miller was awarded the Navy and Marine Corps Commendation Medal on April 26.

“It is rare that I have an opportunity to award an act of heroism like this,” said Rear Adm. Cedric Pringle, commander of Expeditionary Strike Group 3, at the ceremony. “Happening only hours after the recent attack in Sri Lanka, the world took notice of this event and of Seaman Miller's bravery. His act of faith, in spite of fear, has made a global impact and is a shining example of our Navy's commitment to protect and defend.”

It was partially Miller's Navy experience that helped him make the split-second decision, but he owes a lot of what happened that day to the grace of God, he said.

“I had peace in my mind with it, even though I had the adrenaline rush,” Miller explained. “For the military, this is something I should be ready for.”

However, he specified his relationship with God also made him ready for that decision.

Miller knew the situation could resolve in a variety of ways that day. The churchgoers who left the church were outside praying while they waited for police to arrive, Miller recalled.

“I feel looking back I had so little control over the situation,” Miller said. “I just had one moment to take a chance, it was really God in control. Everything just happened to go right when it did.

“If you have the opportunity to do something (in a similar situation) then you should,” he said.

Miller said it was by chance that he ended up at the church that day. It was only a few minutes after he arrived when the incident took place.

“I originally wasn't planning on going to the service,” Miller said. “I thought I would be volunteering all day but I had to leave early and I had the opportunity to go to church. It was a matter of two minutes. Had I gotten there any later then it would have already happened.”

Miller typically attends service at Mt. Everest Academy. He works nearby for the Navy as a Religious Programs Specialist. He joined the Navy in August 2018, just a few months after graduating high school. Miller was assigned to work on the amphibious assault ship U.S.S. Bonhomme Richard.

“I went into it because I wanted to help people and serve,” Miller said. “And I went in with the intention of being a chaplain. I don't know if that's what my end game is going to be, but we shall see.”