A Navy sailor has been indicted on six charges of maliciously conveying false information by calling in a series of... 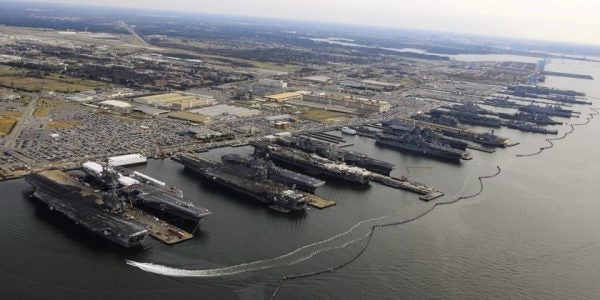 A Navy sailor has been indicted on six charges of maliciously conveying false information by calling in a series of bomb threats to various ships and bases across Hampton Roads in early August, according to federal court documents.

Petty Officer 3rd Class Allante Martanaze Arrington, 24, is a boatswain's mate who has been assigned for more than three years to the USS Oak Hill, a dock landing ship homeported at Joint Expeditionary Base Little Creek in Virginia Beach, according to a Navy biography. The Oak Hill, which has been in the Caribbean since early September helping with hurricane relief, was on the receiving end of at least one of those threats, the indictment says.

Arrington, of Ohio, enlisted in 2014. He appeared in his working uniform Friday for an initial appearance in U.S. District Court and was released on his own recognizance. With conviction, each count carries a maximum sentence of 10 years in prison. An arraignment is scheduled Wednesday.

The threats rolled out in quick succession Aug. 2. They caused a series of lockdowns and evacuations that affected ships and pier operations for hours as emergency responders and NCIS investigators fanned across Little Creek and Naval Station Norfolk.

According to the indictment, filed Wednesday, the threats began around 6 a.m. Arrington is accused of using a cellphone to call the Navy Region Mid-Atlantic's emergency line and saying “three bombs will go off on base at 9:30.” He's accused of calling it again around 6:40 a.m., and, around 11 a.m., calling the quarterdeck at Little Creek with a more specific threat of a bomb on the dock landing ship Gunston Hall.

Additional calls followed. The indictment accuses Arrington of phoning Little Creek's Rockwell Gym around 1 p.m. to report a bomb on board the Oak Hill, and calling the dock landing ship Whidbey Island's stateroom around 3:49 p.m. with a similar threat.

The threats didn't end Aug. 2. The indictment further charges that Arrington again called Rockwell Gym around 9:56 a.m. Aug. 17 and claimed there was a bomb in a parking lot for the Whidbey Island.

Those incidents followed two others from earlier that week in which sailors at Naval Station Norfolk reported seeing a diver in the water near Pier 7. In another incident later that day at Little Creek, a Navy spokesman said a caller threatened the Oak Hill before hanging up.

The Navy later said none of the bomb threats was credible.