Navy investigators were able to identify the sailor behind a series of bomb threats earlier this year to various ships... 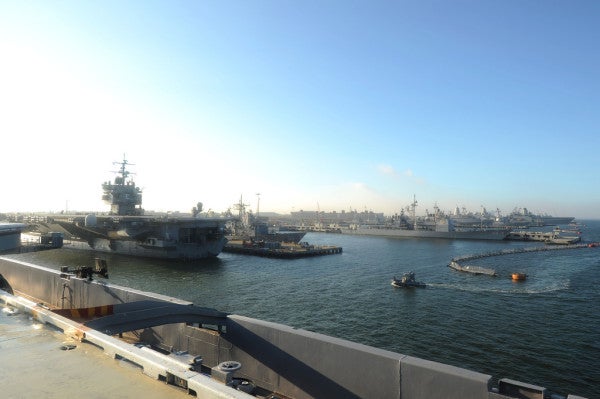 Navy investigators were able to identify the sailor behind a series of bomb threats earlier this year to various ships and bases across Hampton Roads with the help of Verizon Wireless and T-Mobile, according to court documents.

Petty Officer 3rd Class Allante Martanaze Arrington, 24, of Norfolk, pleaded guilty this morning to one count of maliciously conveying false information. He is set to be sentenced March 1 in U.S. District Court in Norfolk, Virginia.

Court documents filed in connection with Arrington's plea agreement offer the public the first glimpse of how investigators were able to link the boatswain’s mate to the bomb threats, which resulted in a series of lockdowns and evacuations that impacted ships and pier operations at Joint Expeditionary Base Little Creek in Virginia Beach and Naval Station Norfolk.

According to court documents, Arrington, who was most recently assigned to the Oak Hill Dock landing ship home ported at Little Creek, started making the bomb threats at 6 a.m. Aug. 2 to different buildings and naval assets at Little Creek. Among other things, he claimed there were bombs on the Oak Hill, the Gunston Hall and the Whidbey Island.

The Navy later said none of the bomb threats was credible.

Arrington masked his phone number during each call, court documents said. Caller ID showed them all as marked “private.”

The court documents explain that the Navy uses a central office exchange service to handle Little Creek's phones, and that the system is managed by Verizon Wireless.

Naval Criminal Investigative Service agents sent an Emergency Situation Disclosure on Aug. 2 to Verizon Wireless requesting all incoming call information that morning to the numbers that received the bomb threats.

Verizon provided the information Aug. 4, revealing 15 possible phone numbers for the person responsible. All were associated with T-Mobile.

From there, NCIS sent an exigent circumstances request to T-Mobile seeking information about the bomb threat calls in question, court documents said.

T-Mobile responded with all relevant calls, allowing investigators to determine the exact phone responsible for making the bomb threats, documents said. The information also showed the caller was using special code before dialing the numbers in question to mask his identity.

Records maintained by T-Mobile and the Navy later identified Arrington as the cellphone's owner. And in an interview August 17 with NCIS, Arrington acknowledged ownership of the phone.

Further investigation revealed some of the bomb threats were made from a location near Arrington's home, documents said. Others were made on Little Creek.