The Navy is rescinding its long-standing tradition requiring sailors to have 12 years of blemish-free conduct to rate gold stripes, officials announced Monday 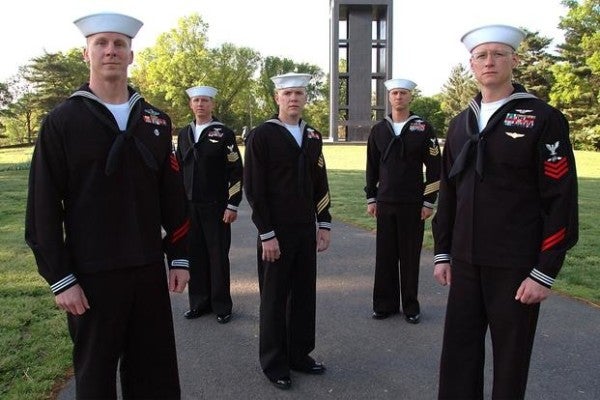 The Navy is rescinding its long-standing tradition requiring sailors to have 12 years of blemish-free conduct to rate gold stripes, officials announced Monday.

Soon, it won't be so easy to spot enlisted sailors who've gotten into some trouble in the past. Starting June 1, sailors with less-than-perfect records will no longer be required to wear red service stripes and rating badges on their uniforms in place of gold.

The message was signed by Chief of Naval Personnel Vice Adm. Robert Burke. Lt. j.g. Stuart Phillips, a spokesman for Burke's office, said senior-enlisted feedback from the fleet prompted the Uniform Matters Office to look at revising the rules for gold rating badges and service stripes.

“The feedback received stated the desire in the fleet is for there to be a single criteria that encompasses the achieved milestone of all enlisted sailors with 12 years of service,” Phillips said.

Under the current regulation, only those who meet the minimum requirements for the Good Conduct Award can wear gold rating badges and service stripes, each of which marks four years of service. If a sailor hits the 12-year mark before meeting those requirements, they wear red stripes.

Sailors who have qualified for the gold stripes but are later convicted by court-martial or nonjudicial punishment (NJP) must also switch to red. At that point, the 12-year clock to earn the gold stripes back starts over again. That means most end their careers before requalifying.

In 2017, Chief Musician Jessica Privler called for a change to that policy. Sailors who receive an NJP can lose pay, rank or face other punishment, shewrote in the U.S. Naval Institute's Proceedings magazine.

“Must one also atone for wrongdoing by being marked with differentiating uniform components?” Privler asked.

Red service stripes can humiliate the wearer and invite gossip, she said, and the color of the uniform items can lead others to mistrust their work or devalue their potential.

“Ultimately, we must ask ourselves what the goal of this regulation is and what it achieves,” Privler wrote. “If the answer is public shaming, then the Navy is successful. … By leaving this tradition behind, we would allow sailors to move on from their past mistakes.”

In June, all sailors with 12 years of active or drilling Reserve time in the Navy, Marine Corps, or Navy and Marine Corps Reserves will qualify for gold stripes and badges.