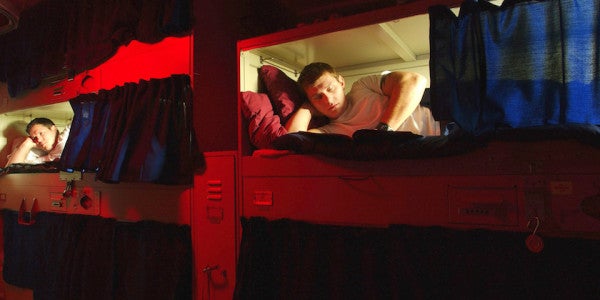 About 18,000 sailors spent more than 60 percent of the year away from home during fiscal 2016, exceeding the Navy’s own guidelines for keeping its crews well-rested and reducing strains on sailors’ personal lives, according to a Congressional watchdog report. And the Navy says the actual figure is likely even higher.

Before the Sept. 11 terrorist attacks, Navy deployments typically lasted about six months. But as demand for forces around the world grew in conjunction with wars in Iraq and Afghanistan, and other conflicts, deployments began to inch upward to as much as nine or 10 months. That figure doesn’t include time sailors spend underway to prepare for those deployments, either.

Under a plan by Norfolk-based U.S. Fleet Forces Command, the Navy is working to make seven-month deployments the new standard. The USS Harry S. Truman was supposed to be the first aircraft carrier to deploy under the seven-month plan in 2016, but even that deployment was extended by a month.

While the GAO relied on information from the Defense Manpower Data Center to come up with its estimate, the Navy said that figure is likely an undercount. The Navy estimated 31,000 sailors were away from home for more than 220 days during the 2016 fiscal year, but couldn’t explain the discrepancy, according to the report.

Inaccurate data recording could mean “there will be a lack of valid data to improve readiness of the Fleet and Health of the Force,” Navy Personnel Command spokeswoman Katie Suich said in an email.

In 1999, Congress required the Pentagon to begin tracking how much time service members spent away from home, including for deployments, training and exercises. The Defense Department calls that time “perstempo,” which is short for personnel tempo and includes deployments that are part of the more commonly used phrase of operational tempo.

But the Defense Department hasn’t defined a perstempo threshold that encompasses events outside of deployment, nor has it directed the individual services to do so, according to the report. Only the Navy and Special Operations Command had established measurable limits.

As a result, the GAO said, the Pentagon can’t adequately track just how long service members are spending away from home – data that is important “in monitoring and gauging the stress on the force,” as well as associated effects on readiness.

Defense Manpower Data Center analyzed by the GAO showed at least 51,000 active duty troops were gone at least seven months in fiscal 2016, a number it called “conservative” because of incomplete data. Records were also missing for at least 145,000 personnel who deployed between fiscal 2014 and 2016.

“DOD has simply not made this a priority,” John Pendleton, the GAO’s director of defense capabilities and management, said in a podcast posted to the office’s website along with the report.

The report recommended that the Under Secretary of Defense for Personnel and Readiness, along with individual service branch leaders, clarify perstempo thresholds, while moving to collect complete data. The Pentagon agreed with both recommendations.

“Until they answer these questions by setting clear policy and gathering reliable data, I think they’ll be challenged to keep their commitment to take care of service members and their families,” Pendleton said.