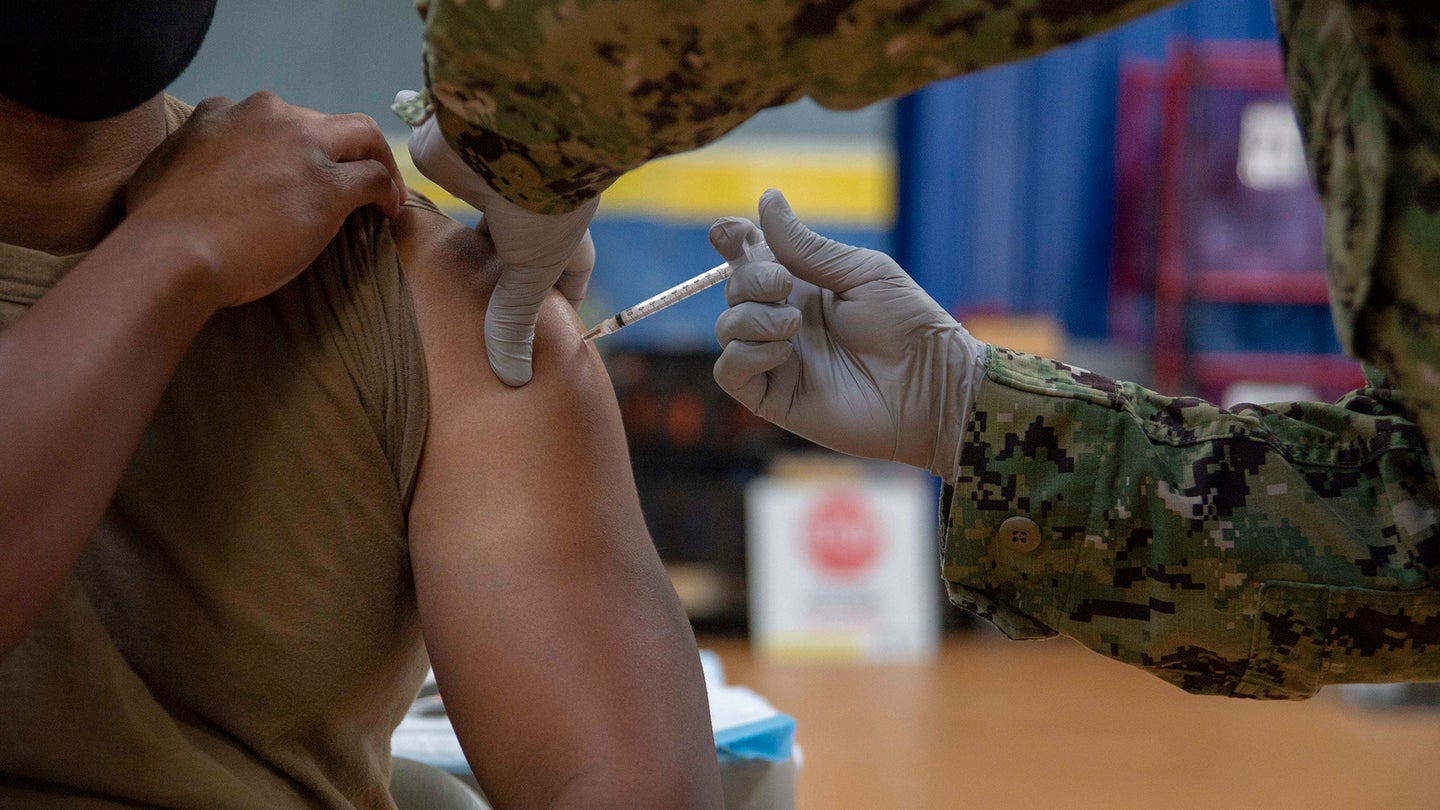 Sailors who refuse to get immunized for the novel coronavirus (COVID-19) could end up owing the Navy a lot of money.

The Navy’s COVID-19 vaccination program could require sailors to repay bonuses, special pays, and the cost of their training if they are discharged for refusing to get vaccinated.

“Anytime a sailor enters into an agreement for special pay, they sign a contract that explains they are subject to repayment if they fail to fulfill the terms of the contract,” said Lt. Travis Callaghan, a spokesman for the Chief of Naval Personnel.

That means sailors who are discharged for refusing to get vaccinated could have to fork over any of their special and incentive pays including selective reenlistment bonuses, sea duty incentive pay, Department Head and Command Retention Bonuses, Callaghan said. They could also be on the hook for any money that they have received from the Navy’s collegiate programs including the Navy Health Professions Scholarship Program and Nuclear Propulsion Officer Candidate, Callaghan said.

The amount of money sailors would have to repay the Navy for their education and training would vary based on the length of the school they attended and the specialty they trained for, he said.

“The Navy recoups costs in the circumstance of graduate education programs such as Navy Health Professions Scholarship Program,” said Callaghan referring to an academic program that pays full tuition, a monthly stipend, and a $20,000 signing bonus for sailors who agree to serve as a Navy physician for three or four years. “The Navy is exploring the potential of recouping similar training costs in other specialized programs.”

Under the Navy’s mandatory COVID-19 vaccination policy, all active-duty and Reserve sailors must be fully vaccinated by Nov. 28 and Dec. 28 respectively unless they have been approved for a religious or medical exemption.

The Navy has consistently led the other military services in terms of how many sailors have been fully vaccinated. The exact reasons why have not been determined, but the Navy exempts fully vaccinated sailors from quarantining for two weeks prior to deploying; fully vaccinated sailors generally have more freedom to leave their ships during port visits; and the deadly COVID-19 outbreak aboard the aircraft carrier USS Theodore Roosevelt in 2020 showed how the disease can quickly spread out of control on warships.

But vaccine hesitancy remains an issue for the Navy as well as the rest of the military. R. Davis Younts is a Pennsylvania-based attorney who represents 25 service members who refuse to get vaccinated, including 15 Navy SEALs.

Younts said the sailors he represents would be affected if the Navy tried to recoup their bonuses and other costs.

“Most of my clients are looking at a range of $30,000-$40,000 the Navy will try and force them to pay back,” Younts said. “This is consistent with the pattern of escalating threats the Navy has made to my clients.”

Despite the possibility of owing the Navy that much money, none of his clients have decided to get vaccinated for COVID-19, he said.

Younts said his clients object to taking COVID-19 vaccines for which fetal cell lines were used in the testing and development phase and that mandating that they take the vaccines violates their Christian principles.

However, no aborted fetal cells are in the vaccines that people take and scientists are not conducting abortions to get cells for the COVID-19 vaccines, Kari Debbink, a biology professor at Bowie State University in Maryland, told Task & Purpose in September. The fetal cell lines used to develop COVID-19 vaccines came from abortions carried out in 1973 and 1985, Debbink said.

Moreover, fetal cell lines have been used to develop other vaccines that troops are required to get including those against rubella, chickenpox, rabies, and Hepatitis A, according to Tufts University.

But Younts said none of that changes the position of his clients, who also believe that the Defense Department’s requirement that they get vaccinated is an invasion by the government and “a violation of God given rights.”

“My clients believe that the usage of fetal cell lines derived from abortions in the testing and development of any medical treatment is wrong,” Younts said. “Interestingly, the COVID-19 vaccines have caused many individuals to learn about this unethical practice for the first time and they intend to take a stand against this practice in the future.”

So far, the Navy is the only service with a written policy that could require sailors who refused to get vaccinated for COVID-19 to repay their bonuses, special pays, and the costs of training and educating them.

But that does not mean the other military branches can’t enact similar measures. The U.S. Code calls for service members to repay their bonuses and other benefits “if the member fails to satisfy any such service or eligibility requirement” unless the service secretary believes that recouping that money “would be contrary to a personnel policy or management objective, would be against equity and good conscience, or would be contrary to the best interests of the United States.”

As the deadline nears for both active-duty and Reserve Marines to get vaccinated, “The Marine Corps is considering the release of more prescriptive guidance as it relates to enforcement of policy and disciplinary options for service members who refuse the vaccine without valid exemptions,” said Corps spokesman Capt. Andrew Wood.

The Department of the Air Force will evaluate whether airmen and Guardians who refuse to get vaccinated owe any money on a case-by-case basis, an Air Force official said.

“While the Army is not currently separating or recouping funds from soldiers due to COVID-19 vaccine refusal, under existing Army policy, soldiers who fail to complete the terms of contracts or other service obligations may be required to repay unearned benefits or entitlements,” said Army spokesman Lt. Col. Terence M. Kelley.