The U.S. Navy is proposing soon to decommission six of its 22 Ticonderoga-class cruisers. The 1980s-vintage ships, the largest surface combatants in the U.S. fleet, increasingly are suffering structural problems requiring costly and time-consuming overhauls 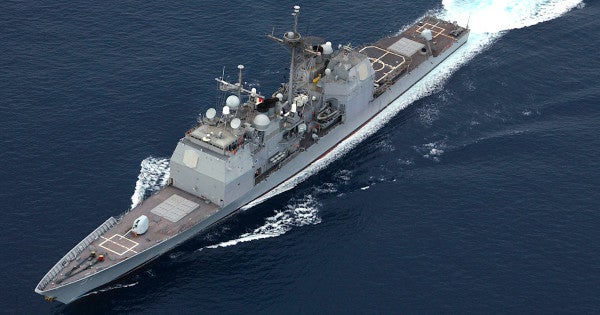 The U.S. Navy is proposing soon to decommission six of its 22 Ticonderoga-class cruisers. The 1980s-vintage ships, the largest surface combatants in the U.S. fleet, increasingly are suffering structural problems requiring costly and time-consuming overhauls.

But the Navy's proposal to cancel shipyard work for six cruisers and retire them starting in 2021 could run into resistance in Congress. And not just for the usual political reasons. The Navy has a hard, non-negotiable requirement for a certain number of cruisers.

That's because, among the Navy's 92 large surface combatants, just the 22 cruisers have the space and communications capabilities to perform a vital command role. Every aircraft carrier battle group includes one cruiser that accommodates the group's air-defense commander and his or her three- or four-person staff.

The commander, who usually is the cruiser's skipper, along with their staff oversees air- and missile-defense for the entire carrier group, monitoring the air space and directing missile-armed escort ships to intercept incoming enemy planes and rockets.

It's unlikely the Navy can alter the Burkes to handle the cruisers' mission. In 2014, Adm. Ron Boxall, then the Navy's surface-warfare director, told Congress the newest Burkes were highly advanced vessels but lacked empty space. “As we look towards going further, we know we've maxed out that hull footprint,” Boxall said.

Until the Navy commissions new, large surface combatants, it needs at least as many cruisers as it has aircraft carriers. Under current planning, the carrier fleet over coming decades could fluctuate between nine and 12 vessels.

The Navy repeatedly has proposed, then canceled, programs to design and build new cruisers. The current plan anticipates the acquisition of the first of a new class of large surface combatant starting in 2025. Unless the Navy can figure out another way to accommodate an air-defense commander, it will need to keep at least 11 Ticonderogas in service through the 2020s.

The cruisers are old and tired. Their hulls have cracked. Their pipes leak. Their SPY-1 radars are unreliable. “I think there is a growing recognition that the material condition of the ships is going to limit most of them to their rated service life,” Jerry Hendrix, a retired Navy captain who is now an analyst with the Telemus Group, told Defense News .

Congress in 2014 rejected the Navy's plan to lay up and slowly modernize 11 of the 22 cruisers in order to extend at least some of the vessels into the 2040s. Instead, lawmakers directed the sailing branch to lay up just two cruisers a year for no more than four years and allow no more than six of the ships to undergo modernization at any one time.

Rep. Joe Courtney, a Connecticut Democrat and chair of the Seapower and Projection Forces Subcommittee, told Defense News he was open to a new cruiser plan. “In previous years, we have put significant restrictions on the retirement and life-extensions to ensure that the fleet maintains a capable cruiser fleet,” Courtney stated. “I fully anticipate that the subcommittee will again review tradeoffs as it relates to the cruiser fleet.”

So far the Navy has completed or funded the modernization of 10 cruisers. Adding just one more ship to the modernization effort could preserve just enough air-defense-commander vessels to protect an 11-carrier fleet for another decade or two.

The Navy is ready to begin decommissioning the Ticonderogas. It has a plan to preserve a few of them and replace all of them starting in 2025. Congress this time might let it happen. But the timing leaves no margin for error or wartime losses.