A 132-foot robot warship that arrived at Pearl Harbor for testing as a submarine hunter is “creating a new paradigm... 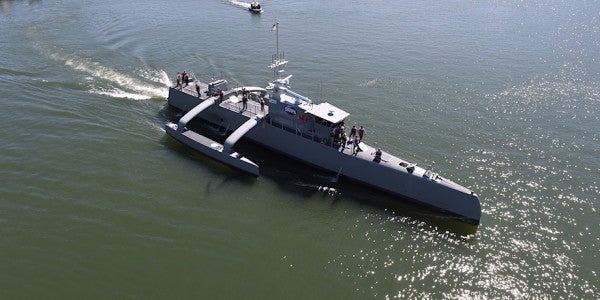 A 132-foot robot warship that arrived at Pearl Harbor for testing as a submarine hunter is “creating a new paradigm for Navy surface forces,” the U.S. Pacific Fleet said.

Former Deputy Defense Secretary Bob Work was a little more specific about the potential at the 2016 christening of the Sea Hunter in Portland, Ore.

“Now imagine 50 of these warships … operating together under the hands of a flotilla commander,” Work said. The Navy would be unlike any in history, with “a human-machine collaborative battle fleet that will confound our enemies.”

With China and Russia pursuing their own large and small unmanned vehicles, that revolution in sea-based drone warfare is unfolding. So far, there’s one Sea Hunter — the world’s largest unmanned ship — with the Office of Naval Research contracting for another in the series in December.

“Sea Hunter’s arrival in Hawaii demonstrates that (unmanned surface vehicles) are capable of deployed blue-water operations, enabling a new class of naval system, as well as long-range endurance of (such a ship) under remote human supervisory control,” Gorman said in an email.

The Office of Naval Research plans to continue developing Sea Hunter into what could become an entirely new class of vessel able to traverse thousands of miles of open seas for months at a time without a single crew member aboard.

The distinctive trimaran already interacted with aircraft carriers, cruisers, destroyers and submarines during “Trident Warrior” exercises this past summer and in 2017.

According to the Pentagon, the ship cost $23 million to produce and is part of a low-cost drone wave that would augment much more expensive manned ships.

“The U.S. military has talked about the strategic importance of replacing ‘king’ and ‘queen’ pieces on the maritime chess board with lots of pawns,” Fred Kennedy, with the Defense Advanced Research Project Agency, said in a release earlier this year.

Raytheon, which helped develop a suite of radars for the Sea Hunter, envisions swarms of undersea drones launched from the seafloor to track enemy submarines linked with Triton unmanned planes and Sea Hunters skimming the surface.

“This is the vision for undersea warfare in the 21st century — a vast network of unmanned vehicles, smart weapons, sonars, and software all working together to make the U.S. Navy’s traditional fleet of ships and submarines more powerful than ever,” the defense contractor said.

Boeing, meanwhile, has a 51-foot robotic submarine known as Echo Voyager which can dive to 11,000 feet and is being developed into a Navy project.

Russia has its own unmanned underwater vehicles, including one called Cephalopod which might be able to carry torpedoes, while China is also developing large autonomous underwater drones.