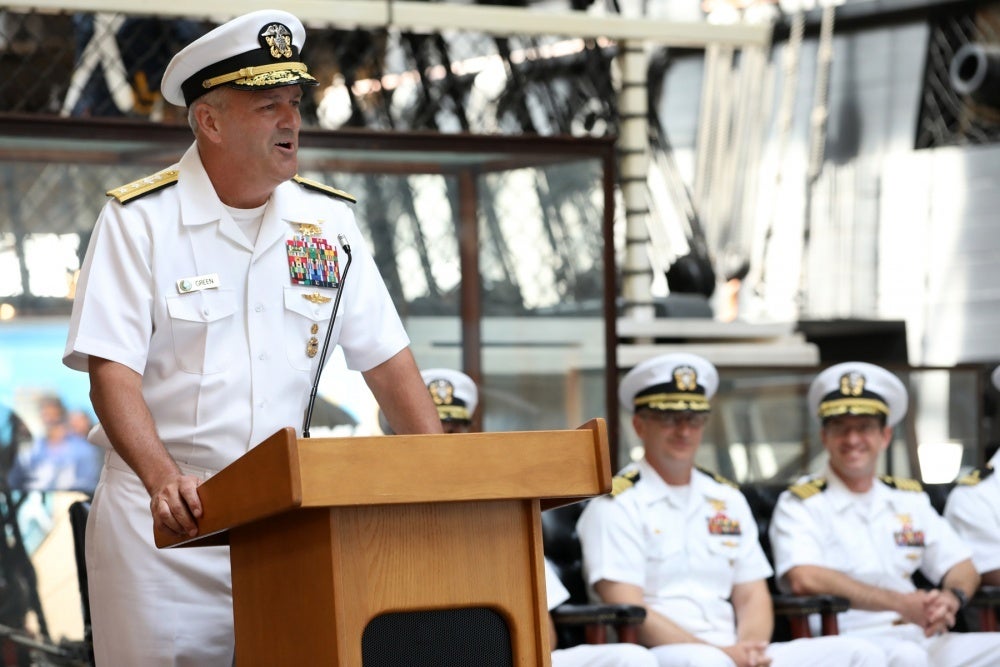 An East Coast cocaine scandal. Sexual assault allegations in Iraq. A war crimes prosecution that earned the ire of the president and brought down the Navy secretary.

All those came to light under the tenure of Rear Adm. Collin Green, the commander of the Navy’s elite SEALs, who left his job this month in a lateral move to Special Operations Command in Florida. He will be chief of staff there.

Though Green’s departure was premature — he had about a year left to go in the SEALs position — the fact that he’s remaining in the special operations community is noteworthy given storm of controversy he oversaw, and tried to correct, while in command.

Green, a 1986 Naval Academy graduate who spent his entire career with the SEALs and in special operations, began his tenure as the Navy’s top SEAL in 2018, just as several of the elite commandos were under investigation for rampant cocaine use, the Navy Times reported.

Then, several SEALs from San Diego’s SEAL Team 7 told their superiors that their platoon chief, Edward Gallagher, stabbed and killed a wounded teenage ISIS fighter and shot civilians during their 2017 deployment in Iraq. In September 2018, Navy SEAL Chief Edward Gallagher was arrested by Naval Criminal Investigative Service agents and ordered confined until trial by Green.

A Navy judge later upheld that order, only to be overruled by President Donald Trump — who, over the next several months, stepped in repeatedly on Gallagher’s behalf, frustrating Navy brass unaccustomed to their commanders-in-chief meddling in disciplinary procedures.

Gallagher denied the charges against him and was acquitted of all charges except one — that he posed for a photo with the fighter’s corpse. When Green sought to boot Gallagher from the SEALs as a result, Trump stepped in and expunged his record.

Gallagher went on Fox and Friends days later, where he complained about Green’s efforts.

“I get a feeling of embarrassment for my community that Adm. Green is letting ego get the best of him at this point,” Gallagher told Fox and Friends host Pete Hegseth, who himself reportedly personally lobbied Trump to intervene on Gallagher’s behalf. Later that day, Nov. 24, Navy Secretary Richard Spencer resigned in the fallout from the clash between Navy leadership and Trump.

Gallagher, however, wasn’t finished with Green.

In May, Gallagher sued the current Navy secretary, Kenneth Braithwaite, and Dave Philipps, a New York Times reporter, alleging the Navy conspired with Philipps by providing private documents to him that ended up in the pages of the Times. In the complaint, Gallagher alleges Green was one of Philipps’ sources, saying the admiral “huddled with Defendant Philipps to ensure that he was provided with full access to (Gallagher’s) private information…”

The lawsuit, filed in the Southern District of California in San Diego, is ongoing.

At a change of command ceremony on Sept. 11 — two years to the day after Gallagher’s arrest — Green handed the reins of the SEALs over to Rear Adm. Hugh Howard III. Howard takes over as yet another SEAL Team 7 member — Petty Officer 1st Class Adel Enayat — is set to stand trial on charges he sexually assaulted a fellow sailor during a booze-fueled 4th of July party in Iraq.

Enayat’s platoon was recalled from Iraq by Green in July 2019 after the alleged victim, a woman, reported the assault. Enayat denies wrongdoing.

After the incident Green told his subordinates “we have a problem” with good order and discipline in the ranks. A subsequent review of Special Operations Command found no cultural problem but said that aspects of the culture, such as its focus on operations, “set conditions favorable for inappropriate behavior.”

Howard, the new commander, intends to pick up where Green left off, according to a command spokesman.

“Upon taking command RADM Howard made clear that stewardship and accountability at every level is required to uphold our standard,” said Capt. Ryan Perry, Howard’s spokesman, in a statement. “He expects the force to lead with humility through triumphs and failures and for Naval Special Warfare to continue to learn, innovate and evolve.”

In a farewell email to members of Naval Special Warfare Command obtained by the Union-Tribune, Green said he is proud of how its sailors overcame the adversity and challenges of recent years.

“We addressed challenges head-on, we took a hard look at ourselves, and we’re a better force for it today,” Green wrote. “As we move forward, we also recognize that we still have much to do.”