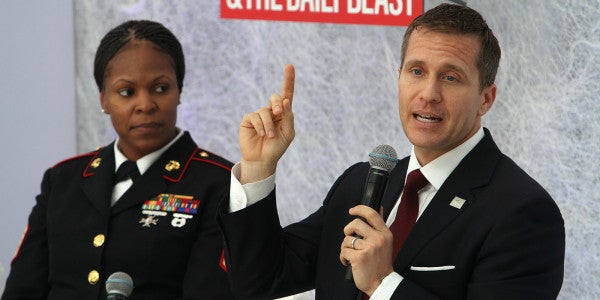 That’s the conclusion of two of those who fell to Greitens on Tuesday.

“Sometimes, you just are on the wrong end of a phenomenon,” said Catherine Hanaway. She made history more than a decade ago as Missouri’s first female House speaker and was attempting to repeat the feat at the gubernatorial level. “We got hit with the tidal wave of the ‘outsider.’”

Lt. Gov. Peter Kinder concurred. “[Greitens’] entire campaign was based on being an outsider, at a time when that appears to be compelling nationally and in Missouri,” said Kinder, who had hoped to cap his unbroken 25 years in state government by seizing its top prize.

The next question will be whether the “outsider” phenomenon can win a general election as well.

The Nov. 8 contest will be between Greitens, one of the least politically experienced gubernatorial nominees in Missouri history, versus one of the most: Democrat Chris Koster, the sitting state attorney general, with an elective résumé stretching back more than 20 years.

“We have an opportunity with our nominee, who embodies that outsider movement, against a truly establishment politician,” said Hanaway. It’s a theme that Republicans are likely to hammer at again and again in the coming months.

Greitens, 42, a former Navy SEAL, author and veterans’ activist, won the race by about 10 points over his closest competitor, retired businessman John Brunner, upending polls that had predicted a tight race.

Greitens had never sought elective office, and he was the only of the four GOP candidates who could say that. Kinder and Hanaway both have held major posts, and Brunner competed in 2012 in Missouri’s Republican race for the U.S. Senate.

Echoing what has become a familiar tactic in recent years by candidates without political experience — especially among Republicans — Greitens waved his lack of connection to the political system as a banner throughout the campaign.

“As all of you know, I’ve never run for office before, I’ve never been involved in politics before,” Greitens reminded jubilant supporters at his victory speech late Tuesday. He called Koster “the poster child for career politicians.”

“The governor’s office is no place for training wheels,” Whalen said.

There are examples both pro and con on the question of whether Greitens’ outsider-themed primary campaign will work in the general election.

Republican presidential nominee Donald Trump rode that theme over more than a dozen opponents with deep political résumés to win the GOP primary. But he is currently polling badly against Democrat Hillary Clinton — the epitome of an establishment candidate — and many analysts blame missteps caused in part by his inexperience.

On the other hand, there is neighboring Illinois, which, despite being a generally more liberal state than Missouri, elected in 2014 Republican Gov. Bruce Rauner, a businessman who campaigned on the fact that he had zero previous political experience.

Greitens “was very successful in turning out new voters to the Republican primary” because of that outsider appeal, said Hanaway. “I think he captured the same spirit of people being very angry that Donald Trump has captured.”

If Greitens’ victory was fueled by today’s unusual disdain among the public for political experience, political money had a bigger role than ever. While Greitens on election night touted what he called his “grass-roots” campaign, it was, financially speaking, anything but. He spent more than $8 million to win the primary, most of it raised by big-money donors from outside Missouri.

“His campaign raised an overwhelming amount of money” while still managing to keep the “political outsider” label in place, noted Kinder. “Those two factors loomed very large in the results.”

Kinder and Hanaway both said they are at peace with the primary election outcome.

“I’ve got no regrets, none at all,” said Kinder, who will finish his third term as lieutenant governor in January. “I ran a positive campaign that addressed issues.”

He added: “I’m enjoying a respite right now. I will tell you the feeling of relief that came over me (by) Thursday is enormous. … The relentless pressure of the campaign and fundraising is off.”

Kinder said he hasn’t decided what he will do next. “I’m certain that God has something in mind for me,” he said.

Hanaway, who had been an attorney in private practice before the campaign, said she will return to that life.

“I’m so pleased that there were so many young women active in our campaign,” she said. Like Kinder, she said she intends to continue working for Republican causes.

Brunner’s campaign didn’t respond to a request for an interview Friday.