Navy Chief Special Warfare Officer Joseph John Schmidt III has been living dual lives. As a member of the Navy... 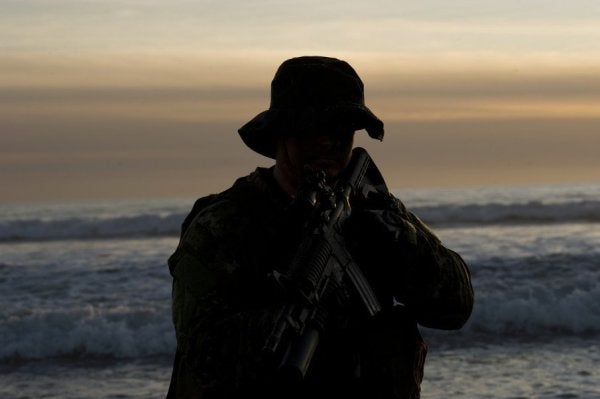 As a member of the Navy SEALs, the 42-year-old boasts a chest of ribbons and medals during his 23 years in the military, including a valor citation for combat overseas. To his East County neighbors and Coronado shipmates, he’s been the married father who has given pep talks to special-needs children in Los Angeles and toured the country recruiting for the elite Naval Special Warfare teams, even serving as the face of the SEAL program on its website.

The Coronado-based Naval Special Warfare Command has launched an investigation, and a commissioned officer has been assigned to handle the case.

Major questions include whether Schmidt violated rules mandating that SEALs obtain advance approval from their commanders for outside work and whether the SEAL brass has been quietly condoning his film work. The investigation began only eight months before Schmidt had planned to retire, and disciplinary action could affect his rank and pension benefits.

“We have initiated a formal investigation into these allegations. There are very clear regulations which govern outside employment by (Naval Special Warfare) personnel as well as prohibitions on behavior that is discrediting to the service,” said Capt. Jason Salata, a spokesman for the SEALs.

In an interview this week, Schmidt’s wife of 15 years claimed that many high-ranking SEALs have long known about her husband’s movies and seemed to tolerate his moonlighting. She also alleged that the SEALs invited her to the commandos’ Coronado campus to sign autographs for troops after she was named a 2011 Penthouse Pet of the Month.

The armed forces’ rules for secondary employment have the force of a “punitive instruction,” which means violators can be tried under the Uniform Code of Military Justice for lack of compliance.

The military has a long history of punishing active-duty service members and even veterans who do everything from writing unauthorized memoirs, to taking side jobs without permission, to engaging in work seen as detrimental to the military’s reputation.

Like other military branches, the Navy bans activities that prejudice “good order and discipline or that is service discrediting,” risk potential “press or public relations coverage” or “create an improper appearance.”

For instance: After she posed nude in a 2007 Playboy magazine spread, U.S. Air Force Staff Sgt. Michelle Manhart received a formal reprimand, was removed from her position as a training instructor and was demoted.

During a 1980 probe of seven servicewomen who appeared naked in Playboy, investigators also discovered that a male Marine major had posed in Playgirl. The armed forces punished the women with involuntarily discharges and gave the major a formal reprimand, allowing him to remain in the service.

SEALs also are barred from employment that discloses secret tactics and techniques, markets the SEAL’s active-duty status or involves a contractor doing business with the U.S. Department of Defense. Many high-profile SEAL misconduct cases have fallen into these categories.

Schmidt’s unlikely entry into the skin trade turns on a very different kind of moonlighting gig he took while serving as a SEAL in Virginia.

He and his wife founded the Norfolk-based real estate company Schmidt and Wolf Associates in 2005, according to Virginia state documents. Within two years, losses at multiple rental properties created nearly $1.8 million in personal debt, according to the couple’s Chapter 7 bankruptcy filing.

Three properties had both first and second mortgages, and bankruptcy records show the pair had resorted to using credit cards to finance loan repayments. Schmidt’s Navy pay was less than $60,000 per year at the time, according to the federal filing.

As business losses deepened, she became a stripper to make ends meet, logging long weeks in Las Vegas and sending money home. Then she reluctantly returned to making sex films for the cash, she said.

“Once you’re recognized and you build a brand and you’ve got your fans who know who you are, when you go to try to find a job, you can’t get another job,” she said.

Jade said she tried to get a management job at a luxury hotel in San Diego last year. Before she finished her employment interview, a fan recognized her, the gossip quickly spread through that office and she realized she couldn’t work there.

She alleges that many of his fellow SEALs watched the videos online.

“They knew about it at work,” Jade said. “He got called in and they said, ‘Look, keep it on the low, don’t mention the SEAL name and blah, blah, blah.’

“He was always pretty open about it with the command. I mean, honestly, all of his buddies knew about it. Everybody knew about it,” she said.

While Jade has alluded to an unnamed husband who’s a SEAL in several interviews and on social media, the Union-Tribune has found no reason to suspect that she or Schmidt ever used his military career to market their films or herbal products.

He has helped to promote her work, however.

In a 2013 appearance with Jade on the “Dr. Susan Block TV” show, he spun on a stripper pole while wearing a Santa hat. The marketing for the Internet event played on current events, including the late 2012 massacre of schoolchildren at Sandy Hook Elementary School in Connecticut and America’s ongoing wars in Iraq and Afghanistan.

“America treats sex, not violence, as the biggest threat to families and the nation,” the ad reads. “As long as we do that, we can expect more massacres, at home and abroad. As long as we sanction invasions, executions and drone strikes that kill children while humiliating a decorated general not for bombing innocents but for having an affair, why should we be surprised when one of our troubled young men picks up a few of his mom’s prized military-style guns and mass-murders a bunch of kids on his own?”

Jade said she and her husband never saw the ad and were shocked when it was shown to them. She said they would never endorse any statement against the military or the nation’s war policies or inject her husband into political causes.

She said military fans once sent her a photo of their armored vehicle in Iraq decorated with her name on it — misspelled — thanking her for helping them stay motivated through their combat deployment.

Jade said that when she was summoned to SEAL headquarters to sign autographs as a Penthouse Pet, she allegedly recognized local strippers there giving buzz cuts to recruits.

The Navy hasn’t set a deadline for when the investigation is expected to wrap up.