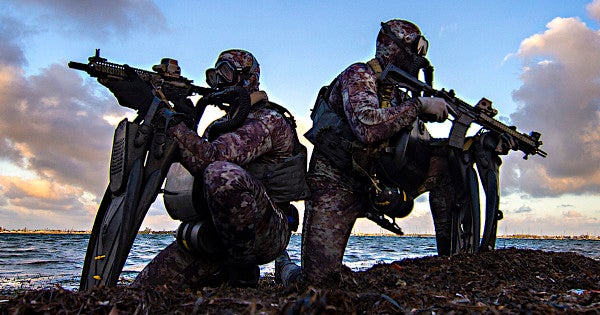 A member of the Navy's elite SEAL Team 6 who was named its Sailor of the Year in 2016 has been charged with pretending to be someone else over text messages so he could get nude photographs from women.

Petty Officer 1st Class Aaron Howard faces a general court-martial at Naval Station Norfolk, although his civilian defense attorney is seeking to have the case dismissed during a hearing next week.

The case is thrusting the ordinarily secretive naval special warfare community into an uncomfortable spotlight once again.

On Wednesday, a platoon of San Diego-based SEALs was sent home early from Iraq “due to a perceived deterioration of good order and discipline within the team during non-operational periods.” And earlier this week, Navy Times reported that members of Virginia Beach-based SEAL Team 10 routinely used cocaine and were able to cheat drug tests before they were caught last year.

Howard's case began with a broader investigation into spoofing — the practice of disguising a communication to make it appear its from a trusted source — at Naval Special Warfare Development Group, according to defense attorney Michael Waddington.

He said someone was using a program to send text messages from fake phone numbers to SEALs and others in the Virginia Beach-based command, which is also known as DEVGRU, or more popularly as SEAL Team 6.

“If you want to embarrass DEVGRU and create a lot of dissension in the ranks it would be so easy to text different people,” he said. “This goes beyond this asking for photographs.”

Charge sheets accuse Howard of pretending to be multiple people to request the pictures of naked women.

But Waddington said Navy investigators didn't find any nude pictures on Howard's phone, that Howard passed two polygraph tests and the only thing linking him to the messages is that whoever sent them said he or she was once stationed in San Diego and liked to work out with kettle bells. Waddington said that description could apply to any number of SEALs and that whoever wrote it also could've just made it up.

Howard is originally from Texas and was based on the West Coast from 2008 to 2014, according to records provided by the Navy.

Waddington said the case should be dismissed, in part, because he believes the Navy effectively made up charges that aren't specified in the Uniform Code of Military Justice, such as “impersonating a person” and “requesting nude photographs under false pretenses.” Each of the specifications Howard has been charged with are under General Article 134, which covers “all conduct of a nature to bring discredit upon the armed forces.”

Waddington has also filed a motion claiming unlawful command influence from Naval Special Warfare Development Group for telling Howard's teammates about the case in a Powerpoint presentation and discouraging them in an email from cooperating with his defense. He said none of Howard's SEAL teammates have been willing to communicate with him since he was “thrown out of his unit” and put on “trash detail.”

That lack of cooperation is problematic for Howard, in part, because Waddington wants to use good military character as part of his defense, noting that Howard has won numerous medals, including the Bronze Star with Combat V for valor.

“They have completely obstructed our ability to even defend him. The command can't interfere with someone's right to due process,” he said.

If the case is not dismissed, Howard plans to plead not guilty to all charges.

“We're fighting this to the end,” Waddington said.