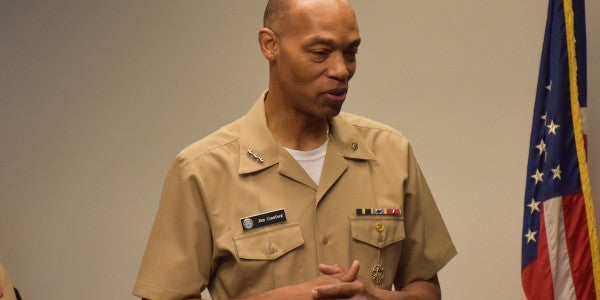 Appointed by the U.S. Court of Appeals for the Armed Forces to probe allegations that high-ranking Navy officers illegally tainted the criminal case of Special Warfare Operator Senior Chief Keith E. Barry, Air Force Col. Vance H. Spath determined that the actions of Crawford and others failed to “engender confidence in the process of this case or the military justice system as a whole.”

Barry was court-martialed and convicted of rape in San Diego in late 2014, in a case that hinged on whether he secured sexual consent from a woman during a month-long relationship between 2012 and 2013.

In 2015, he urged the commander who convened the court-martial to either vacate it or grant him clemency. He claimed that the woman was using the criminal justice system to punish him for ending their relationship.

Barry found a sympathetic ear in Rear Adm. Patrick Lorge. Then the commander of the San Diego-based Navy Region Southwest, Lorge wanted to overturn the verdict saying it lacked sufficient evidence, was overseen by a judge who was not objective and Barry “may not have committed the crime.” Lorge did not overturn the verdict because of unlawful command influence from two admirals in 2015, according to court filings.

Related: Did The Navy’s Top Lawyer Illegally Conspire Against A Navy SEAL? »

Called the “mortal enemy of military justice,” unlawful command influence occurs when senior commanders coerce parties in a court-martial case, jeopardize the appellate process or undermine the morale, respect and public confidence in the armed forces by appearing to pressure others to tip the scales of justice.

Vice Adm. Nanette DeRenzi, the former Judge Advocate General of the Navy, told Lorge about political tension from Capitol Hill over perceptions about the lax prosecution of sexual assault defendants.

Those words might have influenced Lorge’s understanding of the Navy’s reputation with lawmakers, Spath ruled, but her comments were never intended to guide his decision in the Barry matter.

Instead, Spath set his sights on Crawford, the Navy’s Deputy Judge Advocate General and commander of Naval Legal Service Command. He pinned on his third star and replaced DeRenzi as Navy JAG on June 26, 2015.

During his September testimony, Crawford denied that he helped to guide Lorge’s decision, but Spath ruled otherwise, pointing to a pair of discussions between the admirals, one in person and the other on the telephone.

In their private session, Crawford urged Lorge “not to put a target on his back,” a remark Lorge relayed to his deputy attorney, Lt. Cmdr. John Dowling. Dowling, Spath wrote, “was surprised by the content of the discussion which is why the comments were so memorable for him.”

Lorge’s impression was that Crawford believed Lorge should approve the findings and sentence in Barry’s case, Spath determined. In fact, the meeting itself “confirmed the pressure on the system at a minimum” to prod commanders to be seen as cracking down harder on sex assault cases, Spath decided.

In a follow-up telephone call, Lorge hung up convinced that he couldn’t order a new trial for Barry or vacate the SEAL’s sentence, Smith determined.

Jones later advised Lorge that he could note in his written order that he struggled with reaching his decision, an option the rear admiral adopted but which did nothing to alter Barry’s fate.

“As always, the Navy wishes to preserve the integrity of the court's deliberation, and it will therefore refrain from commenting on matters related to the case at this time,” she wrote in an email to The San Diego Union-Tribune.

“The overwhelming finding by the judge in this matter was that Vice Adm. Crawford’s testimony was not credible. He was just not truthful,” Sheldon said.

Echoing earlier calls for Crawford to resign, Sheldon urged the Navy’s civilian and uniformed leaders to decide whether he should remain as the service’s top legal voice.

“For an officer of the court to do what Vice Adm. Crawford did is wrong,” Sheldon said. “It never should’ve happened but it goes to a larger issue involving military justice and sexual assault cases. The process has become too politicized and defendants are not always getting fair trials.”

Spath, the Air Force’s chief trial judge, was asked to handle Barry’s case because Navy and Marine Corps trial judiciary was disqualified from hearing it due to concerns about command pressure. The matter now returns to the U.S. Court of Appeals for the Armed Forces in Washington, D.C., for a final determination.

Sheldon said he would push for a full exoneration of Barry, with his rank restored and back pay disbursed for his years behind bars.

“The Navy has engaged in a pattern of obfuscation in his case from the very beginning all the way through the most recent hearings,” Sheldon said. “They want to try to keep sweeping this under the rug but we’re not going to let them do that.”

In his ruling, Spath indicated that a trial judge confronting Barry’s case would now order a new final action or “the stated desires of (Lorge) would be respected and a new trial ordered.”