The official seal for the aircraft carrier John F. Kennedy has been unveiled, and at first glance the design is clean and simple 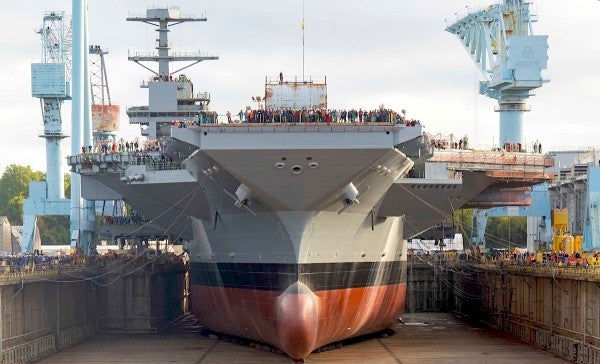 The official seal for the aircraft carrier John F. Kennedy has been unveiled, and at first glance the design is clean and simple.

An iconic image of the young president rises larger than life above the ship that will bear his name. The ship's motto, Serve With Courage, runs below.

But a closer look reveals attention to detail that is the work of Capt. Todd Marzano, the ship's commanding officer, and others. Marzano and crew took the wraps off the seal this week.

The 35 five stars along the outer ring represent Kennedy as the nation's 35th president. One of those stars is after his middle initial. Two other stars are between CVN and 79, as the Kennedy is also known.

Why two? Because CVN-79 is the second aircraft carrier named for the late president, the first being CV-67, the nation's last conventionally powered flattop.

The Roman numeral CIX stands for 109, a tribute to Kennedy's service in World War II aboard the PT-109 in the South Pacific. The president's image is set against the backdrop of the moon, an homage to his instrumental role in U.S. space exploration.

In a recent interview, Marzano said he devoted much attention to the seal while juggling duties as the ship's first commanding officer.

“I view that as a significant decision that has to be made early on, because that is going to be with the ship for the next 50-plus years,” he said.

He joked that the Navy taught him how to fly jets and sent him to nuclear school, but nothing really prepared him for designing a ship's seal. He sought and received feedback from hundreds of people, inside and outside the Navy, leaving no stone unturned.

“I threw it out to my nieces,” he said. “Give me your ideas. You're creative.”

The seal unveiling marks another step toward the Kennedy's christening, scheduled for Dec. 7. Caroline Kennedy, the late president's daughter, is the ship's sponsor — the same role she filled for the first Kennedy aircraft carrier.

Marzano said the motto “Serve With Courage” anchors the ship's seal and provides a final perspective.

“John F. Kennedy displayed extraordinary courage, both in combat as a naval officer, and as president of the United States,” he said. “The seal design and ship's motto are a very powerful and fitting way to honor his legacy.”