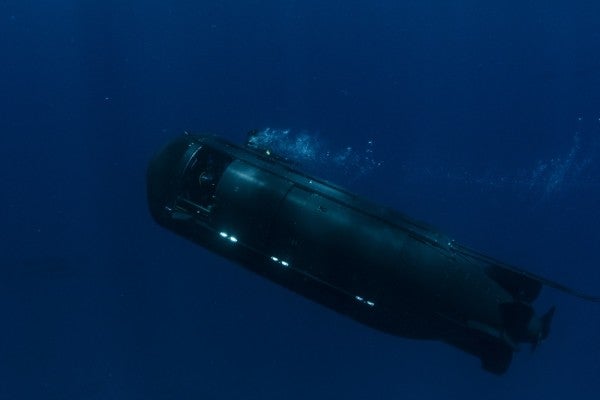 U.S. Special Operations Command will soon conduct a first-of-its-kind test off Hawaii — the launch and recovery of a new SEAL commando minisub from a Virginia-class submarine — as the elite and secretive force retools some of its undersea assets.

SEAL Delivery Vehicle Team 1 at Pearl Harbor has operated older Mark 8 delivery vehicles that are challenged “with technology obsolescence” and are slated to be replaced one-for-one by the newer, slightly larger and 4,000-pounds-heavier Mark 11s, the command said.

Each of the “next generation” 10,000-pound, free-flooding vehicles — which still require the use of wetsuits and scuba gear — carry two crew and four passengers and have better navigation and greater payload abilities. The submersibles are launched from watertight Dry Deck Shelters that are fitted to and connected with larger host submarines.

Related: New Vehicles Will Deliver SEALs With More Stealth Than Ever

“The big takeaway here is we’re fielding a much more capable platform to the fleet, and we’ve got it out there with the operators working on it now,” Dolloff said at the virtual Special Operations Forces Industry Conference co-hosted by the National Defense Industrial Association.

A focus on great power competition

Special Operations Command — like the rest of the U.S. military — is grappling with changing from specializing in low-tech desert conflict to a focus on “great power” competition with China and Russia.

“The National Defense Strategy is clear: We’ve got to build a more lethal force,” Army Gen. Richard Clarke, who’s in charge of Special Operations Command, said at the conference. “We have to continue to foster our allies and grow more partners and we’ve got to reform; in the case of SOCOM we’ve got to reform to meet those threats.”

He added that “we still need guys that can kick down the door, that can shoot well, can jump out of airplanes. … But we need coders. We also need leaders who can apply” artificial intelligence.

Naval Special Warfare said it doesn’t talk about its manning in Hawaii for security reasons, but the Defense Department comptroller’s office said that as of 2018, the command had 525 personnel at Pearl Harbor.

In late 2018, Naval Special Warfare said in a draft environmental assessment that it planned to triple the amount of small-unit intermediate and advanced training conducted by SEALs and other special operations forces on nonfederal lands in Hawaii.

Related: The Navy Can Now 3D-Print Submarines On The Fly For SEALs

According to the assessment, proposed air-based training would include the use of drones, C-17 cargo carriers, helicopters, MV-22 Ospreys and AC-130 aircraft gunships.

Lt. Matthew Stroup, a spokesman for Naval Special Warfare Command, said the environmental assessment has not yet been finalized, but added that “as demand for special operations missions increased over the years, it also necessitated an increased need for more frequent training, and therefore, areas where training occurs.”

The broader Special Operations Command said milestones also have been reached for a new 39-foot Dry Combat Submersible that is watertight like most submarines but would be surface-ship launched, and a follow-on dry minisub that would be hosted by Virginia-class mother submarines.

“We are working really hard with the Navy to try to get (a Dry Combat Submersible) back onto a submarine,” Dolloff said.

The effort follows a 2008 fire that destroyed a much larger 65-foot minisub known as the Advanced SEAL Delivery System as its batteries were charged at the Pearl City Peninsula SEAL compound.

“This capability complements our wet submersible fleet by increasing the mission set and protecting the operators in a dry environment,” Dolloff said.

The command in 2016 said several of the dry-interior subs were slated to be stationed at Pearl Harbor, but recently provided updated information and said that is no longer the case. A modernization effort also is under way to increase the size of Dry Deck Shelters that house SEAL Delivery Vehicles on the top of submarines.

The increased size of the shelters would better accommodate stowage for the new Mark 11 vehicles and possibly Dry Combat Submersibles, but Special Operations Command said it is looking at options.

“We’re looking at launch and recovery (of a Dry Combat Submersible) from a submarine,” Dolloff said. “Is there submerged towing? Are we launching from a Dry Deck Shelter? … We’re looking at all those different things.”