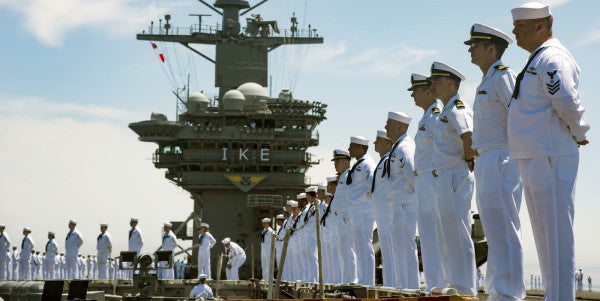 For more than a decade, Malaysian tycoon Leonard Glenn Francis — a grifter known as “Fat Leonard” — bribed Navy officers with booze, prostitutes and luxury gifts to bilk at least $35 million from the U.S. government with inflated bills.

Francis’ arrest in a San Diego sting nearly four years ago triggered the collapse of his overseas port services company, Glenn Defense Marine Asia, the prosecution of dozens of Navy officers and civilian officials, and the ongoing internal investigation of 30 admirals and more than 200 sailors for possible corruption.

While the scandal mostly has played out in federal court, the Navy has been rolling out a series of reforms designed to strengthen its leaders, battle corruption and ensure that a con man can’t assume Francis’ mantle.

In an effort to back up Derrick’s words, Navy officials sent to The San Diego Union-Tribune a report detailing actions taken to ferret out corruption and create better internal controls. They followed that up with answers to questions submitted by the news organization, and with supporting audits and internal papers describing the changes.

Not all of the measures have been fully implemented, the Navy’s main report indicates, but the reforms have been far-reaching. They include the role that auditors and comptrollers play in scrutinizing bills, and ethics training for sailors and how they report suspected wrongdoing to their superiors or agency watchdogs.

Navy reports show that by early 2014, the service had identified key weaknesses in the contracting system. That meant changing how the Navy awards and tasks orders and contracts, schedules ships for port visits, approves the purchase of goods and services overseas, and reviews and pays invoices.

Supply officers are no longer allowed to accept gifts from contractors, disclose sensitive information or project any appearance of impropriety. A little more than a year ago, the Navy also established indefinite delivery contracts with multiple husbanding providers, allowing the fleet to competitively price orders with approved vendors.

Today, the Navy relies on orders at fixed prices pegged to the most current market rates for goods and services as determined by Fleet Logistics Centers worldwide, not by warship supply officers.

After Francis’ arrest and through last year, the Navy suspended 566 vendors and permanently debarred an additional 548 from contracts, according to the federal Interagency Suspension and Debarment Committee. That list included Glenn Defense Marine Asia and 55 of its affiliates across the Pacific Rim.

In 2013 and 2015, staffers in the office of the vice chief of naval operations fanned out worldwide to collect best practices in fighting corruption while striving to help the brass create processes for sailors and Marines to blow the whistle on dirty contractors and military leaders.

Tthe admiralty instituted new ethics training programs, with a particular focus on flag officers and their key advisers, the judge advocate general attorneys, according to a report provided to the Union-Tribune.

Now, all flag officers and civilian senior executive service officials must complete annual ethics training in conjunction with their filing of federal financial disclosure forms. Similar courses are required for the lower ranks.

The Navy Personnel Command continues to modify its evaluation process to “include a more robust and genuine assessment of character” to reflect the need for competence and ethical conduct at every level, from seaman to admiral, she said.