The Navy Is Set To Scrap USS Enterprise, Its First Nuclear Aircraft Carrier

Jim Voorhies keeps coming back to the USS Enterprise. He boarded the world's first nuclear-powered aircraft carrier in 1983 as... 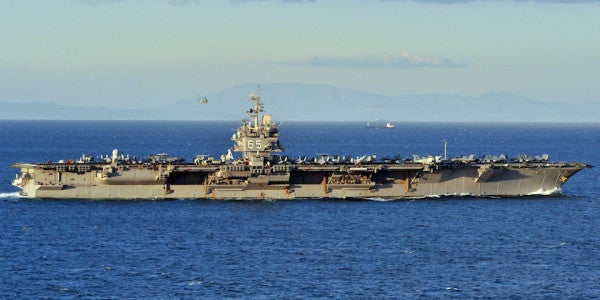 Jim Voorhies keeps coming back to the USS Enterprise.

He boarded the world's first nuclear-powered aircraft carrier in 1983 as a 22-year-old sailor. It became his home for the next four years. As a reactor officer, the ship's unique array of eight nuclear reactors became his stomping ground.

Then Voorhies left the Navy to concentrate on raising a family. It took another decade or so, but he eventually longed to swap sea stories with his old shipmates. He joined the USS Enterprise Association, became its chairman and felt reconnected to his old ship.

Still, Enterprise wasn't finished with him.

Today, Voorhies will attend the ship's decommissioning ceremony, thanks to a fortunate confluence of events that began in 2007.

That year, he started work at S.M. Stoller, a company based in Colorado. A few years later, his company was purchased by Huntington Ingalls Industries, which built Enterprise at its Newport News shipyard. HII renamed the company Stoller Newport News Nuclear.

In 2013, tugboats pushed and prodded the retired Enterprise from Naval Station Norfolk to the Newport News yard to be inactivated. There the ship sat, and since then, Voorhies has wanted Stoller to find an excuse for him to visit Hampton Roads.

That opportunity came this week, when he was called to Newport News on a work-related assignment involving the aircraft carrier USS George Washington, which is in Norfolk and due at the shipyard for a midlife overhaul.

His assignment happens to coincide with the Enterprise decommissioning ceremony Friday morning. Voorhies will be there for a final goodbye, probably with tears in his eyes.

“It's going to be sad,” he said. “I was at the inactivation ceremony back in 2012. I saw grown men blubbering like babies. I never thought I would see that. I saw the families crying with them.”

The decommissioning won't be any easier to watch.

Enterprise also inspired a generation of Newport News shipbuilders and their families. Russell McCullough attended the christening of the Enterprise on Sept. 24, 1960. He was 9 years old, proud of both the ship and his dad, who worked on the catapult team in a large room full of draftsmen.

As the world's first nuclear-powered aircraft carrier, Enterprise represented a new chapter in naval power. To a 9-year-old who looked up to his dad, it was part of the family.

After the ceremony, the audience was allowed to climb onto the ship.

“I was too small to see the flight deck from end to end,” McCullough recalled. “It was that big.”

Plank owners of the aircraft carrier USS Enterprise (CVN 65) gather on the flight deck for a photograph during the ship's 50th birthday celebration. The term “plank owner” is used to identify members of a ship's commissioning crew. Enterprise is the oldest active ship in the U.S. Navy and is making preparations for her final deployment.U.S. Navy photo by Mass Communication Specialist 2nd Class Nathan Carpenter.

His father, also named Russell, died six years later. The chance to work on a history-making warship was a crowning achievement of his life. He moved to Newport News from Oklahoma in 1949 and worked at the yard until he died.

“What it meant to my dad was the American dream,” he said. “You couldn't separate the yard from my dad. He was unbelievably proud of the yard and what it means, and how anybody in America can do anything they want if they just work hard. He had to pinch himself every once in a while.”

McCullough graduated from Hampton High School in 1969. Today he lives in North Carolina, where he's in the ministry. In March 2015, he drove up to Newport News for a final look at the ship.

He saw it next to the Gerald R. Ford, which represents the next generation of naval sea power.

“It was quite a moving experience because they were parked side by side,” he said. “It was surreal.”

The USS Enterprise, which sailed into history as the world’s first nuclear-powered aircraft carrier, will be decommissioned Feb. 3, the Navy announced Wednesday.

The ceremony will take place at

The USS Enterprise, which sailed into history as the world’s first nuclear-powered aircraft carrier, will be decommissioned Feb. 3, the Navy announced Wednesday.

The ceremony will take place at Newport News Shipbuilding nearly 59 years to the day from its keel-laying on Feb. 4, 1958.

On Tuesday, the Navy awarded Huntington Ingalls $25.5 million to continue work on the new Enterprise, also known as CVN-80. The money will allow Newport News shipbuilders to begin fabricating assemblies and other components for what will be the third Ford-class carrier.

Construction is slated to begin in 2018. It will be the eighth ship to bear the name Enterprise, a name that dates back to the Revolutionary War when Americans captured a British sloop and renamed it.

The sixth Enterprise was the famous World War II aircraft carrier, the most decorated warship in U.S. naval history. Voorhies said “his” Enterprise carved out its own chapter in naval lore.

“When I was first assigned to Enterprise, I was disappointed,” he said. “My dream was to get on the new cruisers. They were the sleek, fast greyhounds of the ocean. But then as I got to (Enterprise), I thought, this is kind of neat. This has a lot of history.”