“There’s definitely some disappointment in not going into port ... but we’ve made it this far." 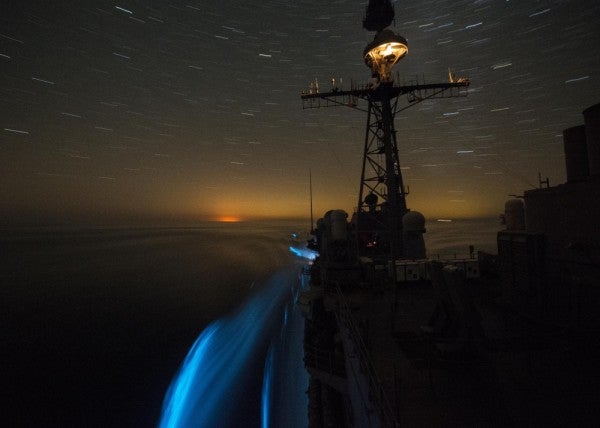 Two U.S. Navy ships have set a new Naval record for consecutive days at sea as they avoid making port because of coronavirus.

The USS Dwight D. Eisenhower and the USS San Jacinto have spent 161 straight days at sea on their latest tour of duty in the Middle East, the Navy announced Thursday in a news release. Both ships set sail from Norfolk, Va., on Jan. 17.

At the time, those aboard the aircraft carrier commonly known as the “Ike” and its cruiser companion had no idea they’d be living a less-terrifying version of the short-lived TNT drama series “The Last Ship.”

“There’s definitely some disappointment in not going into port, especially considering our original plans. But we’ve made it this far,” Petty Officer 1st Class Joshua Grimes told the Associated Press. “It actually makes a lot of us feel very proud that we can be part of this.”

The ships set the record while sailing through the North Arabian Sea on Thursday.

But with the crews staring down many more days at sea, it’s just water under the bridge to Ike’s commanding officer, Capt. Kyle Higgins.

“We think we may be out here a little bit longer, and the potential to pass that mark by quite a bit is fairly good,” he told the AP. “So we might wait for a more round, even number (to celebrate).”

Related: 3 French Cops Accidentally Ship Out On The USS Eisenhower

The previous record of 160 days was set by the USS Theodore Roosevelt in the days following the 9/11 attacks. The Theodore Roosevelt made headlines more recently because of a massive coronavirus outbreak aboard the ship that led to one sailor’s death.

The Ike and the San Jacinto have had to deal with many things (broken helicopter doors fixed by dumbbells, immense boredom), but COVID-19 has not been among them.

“Our ships remain undeterred in the face of adversity and this monumental feat will only make our crews and the Navy stronger,” Higgins said. “I’m so proud of the young men and women I see on the deck plates each and every day.”

It’s not all fun and “steel beach” picnics though, and sailors have asked important questions, namely: Which ship will dock first back in Norfolk, and can it not be us?

“I’ve had a couple requests to see if we could stay out longer to make sure we beat the Ike,” Capt. Edward Crossman, the San Jacinto’s commanding officer said to the AP.

That decision, however, is still many, many days away.