The U.S. Navy warned China to stop "bullying" other countries in the South China Sea as two Navy ships sailed into the middle of a dispute in the contested waterway 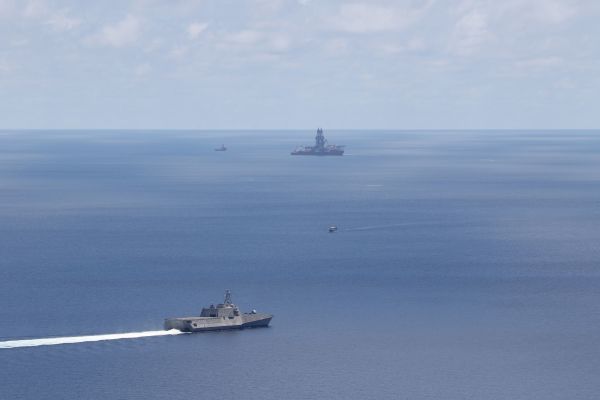 The U.S. Navy warned China to stop “bullying” other countries in the South China Sea as two Navy ships sailed into the middle of a dispute in the contested waterway.

The Independence-variant littoral combat ship USS Montgomery and the Lewis and Clark-class dry cargo ship USNS Cesar Chavez conducted “presence operations” near the West Capella, showing apparent support for the Malaysia-contracted drillship that has been hassled by Chinese ships in recent months.

Adm. John Aquilino, commander of U.S. Pacific Fleet, said in a statement Thursday that the US is “committed to a rules-based order in the South China Sea and we will continue to champion freedom of the seas and the rule of law.”

He continued: “The Chinese Communist Party must end its pattern of bullying Southeast Asians out of offshore oil, gas, and fisheries. Millions of people in the region depend on those resources for their livelihood.”

The West Capella, a ship contracted by Malaysia's state oil company Petronas, has been conducting exploratory drilling in the South China Sea, where it has been harassed, without incident, by Chinese fishing ships, China Coast Guard ships, and a survey vessel.

The Asia Maritime Transparency Initiative at the Center for Strategic and International Studies reports that Chinese ships have also targeted supply ships supporting the Malaysian drillship as it operates off the coast of Malaysia. Vietnamese vessels have also reportedly maintained a presence in the area.

Malaysia has expressed hopes that the standoff will be resolved peacefully, and China has denied the existence of a dispute.

In April, the US State Department criticized China's behavior in an emailed statement to Reuters, writing that China “should cease its bullying behaviour and refrain from engaging in this type of provocative and destabilizing activity.”

This week, Secretary of Defense Mark Esper said “we continue to see aggressive behavior by the PLA in the South China Sea.” He said that Chinese actions include “threatening a Philippine navy ship,” “sinking a Vietnamese fishing boat,” and “intimidating other nations from engaging in offshore oil development.”

The U.S. military has been pushing back with its own activities in the region, to include multiple U.S. Navy freedom-of-navigation operations and a U.S. Air Force bomber overflight last month, among other actions.