China to the United States: Come at me, bro 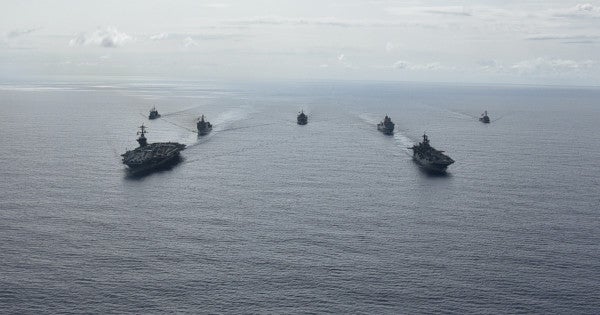 The Pentagon said the U.S. military has had “unsafe” encounters with the Chinese armed forces in the South China Sea during the novel coronavirus (COVID-19) pandemic, which is also a source of deepening tension between the two countries.

There have been “at least nine” concerning incidents involving Chinese fighter jets and U.S. aircraft in the skies above the contested waterway since mid-March, Reed Werner, the deputy assistant secretary of defense for Southeast Asia, told Fox News on Tuesday, adding that China continues to engage in “risky and escalatory behavior.”

A defense official told Insider that some incidents were considered unsafe, though the specific details behind the incidents are unclear.

Chinese media reports indicated that a Chinese navy flotilla led by the Liaoning was conducting “mock battles” in the South China Sea in April.

Werner told Fox that the Pentagon found “the current trend line very worrisome,” adding that the U.S. has lodged several formal and informal complaints in response to recent incidents.

“We've made démarches,” he said, adding that this is a regular occurrence.

Pentagon spokesman Lt. Col. Dave Eastburn said in a recent statement that the Department of Defense was “concerned by increasing, opportunistic activity by the PRC to coerce its neighbors and press its unlawful maritime claims in the South China Sea (SCS), while the region and the world is focused on addressing the COVID-19 pandemic.”

The Defense Department has said that U.S. adversaries are trying to take advantage of the global situation but has also stressed that the U.S. military remains ready to meet that challenge and defend U.S. interests.

The US military has increasingly sought to make its presence known in the South China Sea and the larger Indo-Pacific region, especially after the coronavirus sidelined the US Navy aircraft carrier USS Theodore Roosevelt. The coronavirus originated in China, and both countries have blamed each other, even going so far as to promote conspiracy theories.

In recent months, U.S. Navy ships have conducted patrols and freedom-of-navigation operations in the South China Sea, as well as Taiwan Strait transits, and U.S. Air Force bombers have carried out patrols in the region.

Following a recent freedom-of-navigation operation, Senior Col. Li Huamin, a spokesman for the People's Liberation Army's Southern Theater Command, said the US should focus on fighting COVID-19 rather than conducting military operations.

Tensions in the South China Sea, where the U.S. and Chinese militaries have had a number of unpleasant interactions over the years, come as the U.S. and China spar over the COVID-19 outbreak that has claimed hundreds of thousands of lives worldwide.

The Trump administration, which has come under a lot scrutiny for its handling of the coronavirus at home, has repeatedly criticized China's missteps, which the U.S. says caused a troubling problem that began in China and evolved into a global crisis.