“This is embarrassing. Please stop." 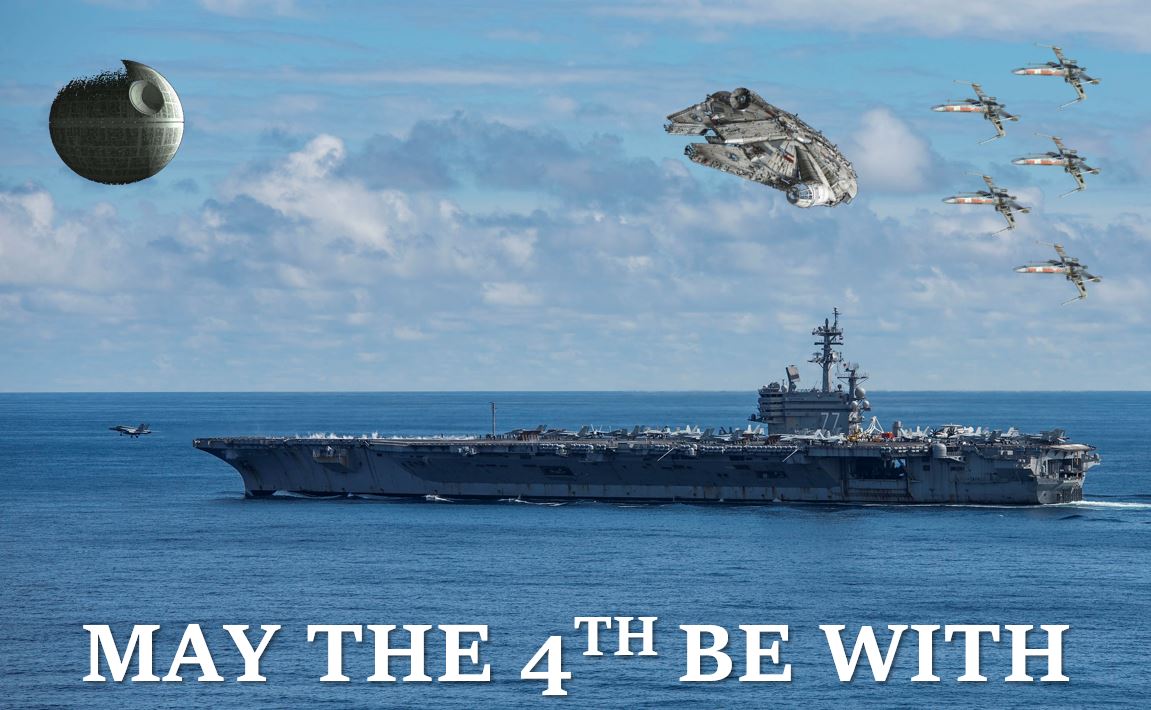 A wise Jedi once said, “do or do not, there is no try,” and while normally I’m a fan of trying, the U.S. 6th Fleet might have been better off not sending this aggressively cringeworthy, though well-intentioned, Star Wars tribute tweet on Monday.

Accompanying the hashtag-heavy tweet is an image of the aircraft carrier USS George W. Bush at sea with the Millennium Falcon and a flight of X-Wings racing overhead towards a looming Death Star.

It’s a scruffy-looking photoshop job, and tagging Jeb Bush in the photo probably wasn't the best idea, but that alone is no crime. The real crime is the string of inaccuracies in the tweet and the text written across the bottom, which should come with an audible facepalm noise.

“May the 4th be with,” wrote 6th Fleet, leaving out the requisite “you” at the end of the famous blessing, “May the Force be with you.”

I hate to be that guy pointing out the flaws in a well-intentioned Star Wars tweet. But we should expect better of our Navy, which is part of a U.S. military that is chock-full of Star Wars nerds who at the very least know how to say “May the Force be with you.”

Furthermore, (pushes glasses up nose), the tweet is inaccurate in that The Resistance did not fight The Empire. The Rebellion fought the Empire in the original Star Wars trilogy films, and The Resistance battled the First Order in the sequel trilogy. “Resistance” and “Rebellion” are similar terms, but most people who’ve been following pop culture for the past 43 years known the difference, at least in the Star Wars context.

Next slide, please: if the 6th Fleet is indeed flying with the Resistance, why are there T-65 X-wings fighters flying overhead? Obviously the older T-65 X-wing had been widely replaced by the more advanced T-70 model by the time of the sequel trilogy, duh!

Unfortunately, there are still more errors to point out in the tweet. The 6th Fleet made two photoshop mistakes that are difficult to unsee: the cockpit and satellite dish of the Millennium Falcon appear on the wrong sides of the freighter, and it looks like a chunk of the upper Death Star is missing. These were likely photoshop errors, though the Death Star gap is definitely an odd one; perhaps it’s a nod to the half-finished look of Death Star II in Return of the Jedi, but that battle station looked way more unfinished than the one in this tweet.

I’m not the only one irked by the lapses in accuracy here. Many Twitter users also shared their disappointment:

I'll be talking to your captains and you will all be harshly disciplined for this embarrassing show.

I'll be recommending demotions across the board

This is embarrassing. Please stop.

Uh, the DS and Falcon are depicted incorrectly. C'mon man!

You didn't need to do this

psssst. you're the empire

May the Force with with you, 6th Fleet. But maybe do some research next time before you tweet.